by Boluwatife Oshadiya
in State News
0

Two new train sets for the Blue Line Rail project have been delivered to Lagos State, according to Governor Babajide Sanwo-Olu.

The governor made this announcement on his Instagram feed, where he had on Monday uploaded images and videos of the brand-new trains.

Lagos Instructs Filling Stations To Operate Between 9am to 4pm

The Governor said ” Dear Lagos, We have taken delivery of two new train sets for the blue line rail.These passenger trains have been cleared at the port of entry, and have been moved to the National Theatre station where they have been lifted onto the elevated rail tracks.”

He also said ”I am indeed glad to inform the good people of Lagos that with the arrival of these train sets, we’re on course with our plans to change the face of the rail transport system in Lagos State. A Greater Lagos is indeed Rising.”

The first phase of the Lagos Rail Mass Transit project’s work has been continuing, according to the Lagos State Government, and the traffic detour in place at Muritala Mohammed Way in Yaba has been prolonged until February.

Dr. Frederic Oladeinde, the state’s commissioner for transportation, made this announcement in a statement. Oladeinde clarified that the delay was required in order for the contractor to finish building the ramp.

He said, “The Lagos State Government is extending the traffic diversion already in place at Muritala Mohammed Way from the previously extended completion date of December 31, 2022, to February 28, 2023. 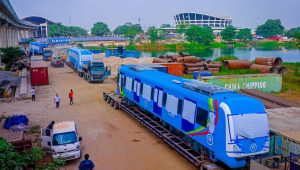 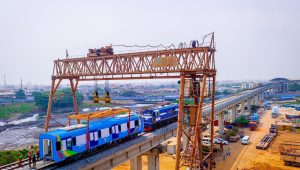 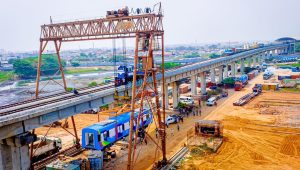 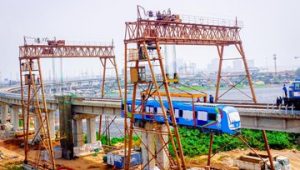 “The construction site will be cordoned off for the safety of the citizens, and emergency vehicles will be on the ground to tow faulty vehicles along the axis. Signages will be placed on the access roads in the presence of the state’s Traffic Management Authority to manage traffic flow and minimise inconveniences.”

Lagos Instructs Filling Stations To Operate Between 9am to 4pm