Yul Edochie, a Nollywood actor, has responded to a Lifestyle blogger Amanda Chisom’s request that he make her his third wife.

Amanda previously stated that she is open to being the third wife of famed actor Yul Edochie.

With many people reacting negatively to the news of Yul Edochie’s second wife and infant boy, the media strategist expressed interest in becoming the actor’s third wife if necessary on her Facebook page.

She also noted with Yul’s kind of voice that’s captivates her soul, she doesn’t mind being a third wife if they would produce such cute son like little Star Dike Munachimso Yul-Edochie.
Sharing photos of Yul with his new wife and son, Chisom wrote:

“Wonders shall not cease, so Yul with all the lovey Dovey has a second wife, and a son and he is so cute.

“We are going back to our root. Polygamy wey no dey stressful. I like this. Gistlover dey plan disgrace, guy man use him hand bring the story. He has a second wife, his wife is aware, gini emezia.

“I don’t know if he needs a third wife because his voice na agbakam isi and if the son will look this fine, I am in.”

In reaction to that, Yul Edochie via his Instagram page laughed off the thoughts of third wife.

Sharing a screenshot of Amanda Chisom offer, Edochie wrote, “Look what I found. I dey my own oh. Lol.” 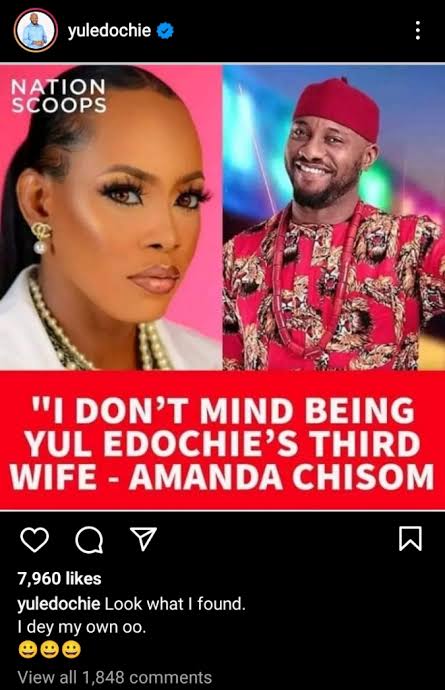