Controversial Nollywood actress Nkechi Blessing has tendered an unreserved apology to the general public for lying about being married to Ekiti State politician, Opeyemi Falegan.

In a post on his Instagram page, Nkechi Blessing warned Opeyemi Falegan to remove her name from his mouth, stating that she had walked out of the relationship since her last visit to London.

However, the actress claimed Opeyemi Falegan has been crying and begging but she saw all the red flags and can not be caught up in such because a failed relationship is better than a failed marriage.

Nkechi Blessing added she was never married to Opeyemi Falegan and apologised to everyone who had thought and felt they were married. Recall on Valentine’s Day the estranged couple claimed it was their anniversary. Falegan went as far as adding his last name to Nkechi’s when he eulogized her.

Nkechi Blessing also urged his ex, Opeyemi Falegan to move on in peace and wished him the best in his future relationships. 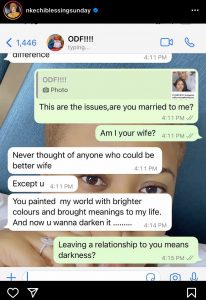 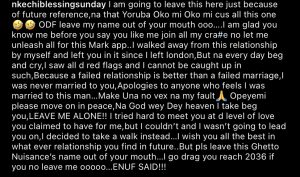 Recall that Nkechi Blessing dragged her ex-boyfriend and politician, Falegan on Thursday, amidst their messy breakup.

Social media users were surprised on Wednesday night, 6th April 2022 when Opeyemi Falagan went on Instagram live to announce his breakup with Nkechi Blessing while calling her unprintable names.

”He Threatened To Kill Me” – Lil Frosh’s Ex-girlfriend, Gift Opens Up About Their Abusive Relationship