Popular Nollywood veteran, Olu Jacobs is known for his fatherly role in movies as well as his thick baritone voice. The Nollywood icon recently showed up at a movie set where his wife, Joke Silva was working with Uche Jombo.

Nollywood veteran and thespian, Olu Jacobs is one of the aged icons in the movie industry who has paid his dues over the years.

The septuagenarian was recently spotted in a video that warmed the hearts of many Nigerians online. 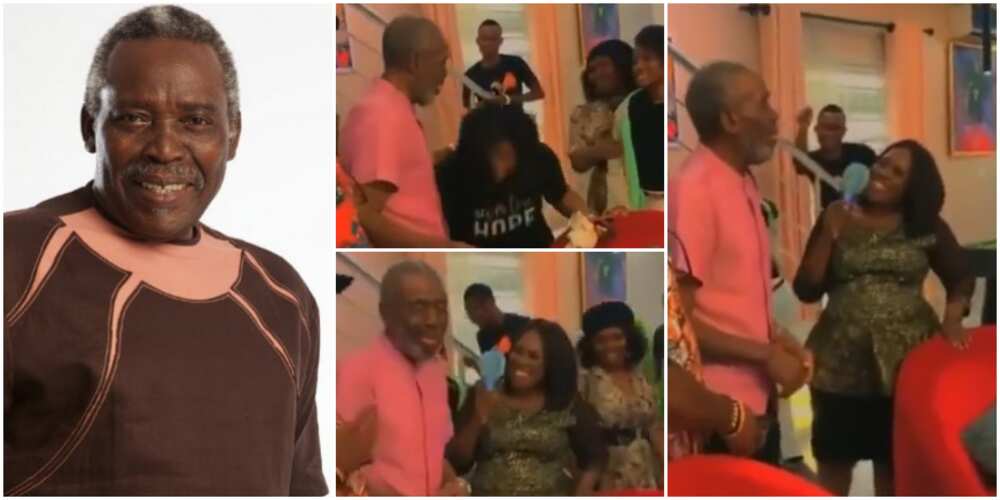 Actress, Uche Jombo took to her Instagram page with the video, which showed the moment Jacobs paid his wife, Joke Silva a surprise visit on set.

The veteran who donned a pink shirt looked older and seemed to have lost a lot of weight, he was, however, coherent and aware of the situation around him.

A surprised Jombo rushed down the stairs to greet him before giving him a hug, an act that got people laughing.

“Such amazing feeling and surprise @_olujacobs a hall of fame visit.”

Watch the video below:

Nigerians react Despite the lovely video, Nigerians could not help but notice the drastic change in Olu Jacob’s physical appearance.

Read some of the comments sighted below:

“He looks so slim.

“Omo old age ehh. He has lost so much weight and the wife kept saying “Uche is here, Uche jumbo” so he will be able to recognise Uche jumbo. Anyways for a man his age, he has done so well.

“He looks so different wow.”

“Uncle Olu looks so different. Healing balm of Christ upon you sir.”

“Man he’s lost a lot of weight mehnnn. I hope he isn’t sick.”

Olu Jacobs turns 79 as his last child becomes a graduate

On Sunday, July 11, Uncle Olu, or Sir J as many preferred to call him turned older and his wife could not contain her excitement as she went on social media to blow the trumpet and appreciate God.

Joke silva captioned her husband’s post as a celebration galore and this was because on Saturday, July 10, the last born of the family, Gbenga Jacobs, graduated from the university.

This you could call a perfect birthday gift for Olu Jacobs and his family as his proud wife who attended the convocation ceremony showered not only her son but other graduating students with prayers.