Igboho was arrested by Interpol at the Cotonou Airport on Monday night while trying to board a plane to Germany with his wife Ropo.

There have been frantic move to prevent his extradition to Nigeria by Yoruba patriots and others as they feared that he would not get justice in Nigeria.

On Wednesday, protesters armed with placards took to the streets in Ibadan demanding the release of Igboho by the Benin Republic authorities.

Though peaceful, the protest temporarily cause mild traffic in Challenge and the protesters sang the praise of Igboho, saying that they would not renege on demanding for Yoruba Nation.

Earlier, rumours that the Yoruba Nation campaigner was already released were debunked by his media aide, Olayomi Koiki.

Prior to the protest, agitators are told to converge at the Soka residence of the campaigner. 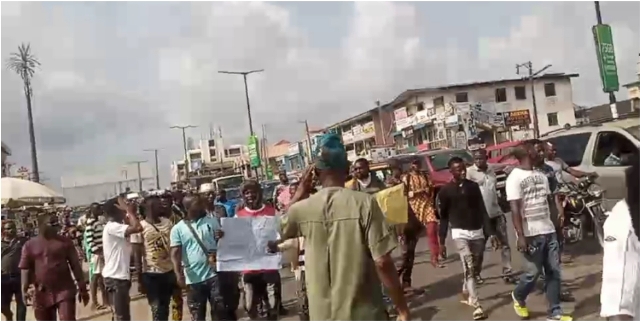 PLEASE LETS ALL BE AT HIS HOUSE IN SOKA IBADAN BEFORE 12 O CLOCK TODAY THANKS AND GOD BLESS. YORUBA NATION NOW NOW NOW.

Musings From My Quiet Place – By Dr. Ibe Kachikwu