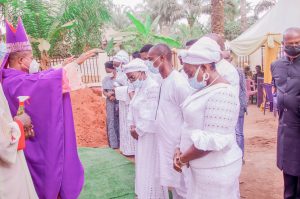 The quiet funeral ceremony was attended by the leadership of VFD Group, led by Chairman Olatunde Busari, Executive Directors Niyi Adenubi, Gbenga Omolokun, Azubike Emodi, Bolaji Adewunmi as well as Managing Directors of the group entities including Sam Chidoka of Kairos Capital and Kanayo Eni-Ikeh of Atiat Leasing. In addition to friends of the corporate world, PDP governorship aspirant in the coming Anambra elections, Valentine Okigbo, also came to condole with and support the Okpala clan.
Nze Okpala Chude Onyemauche was a pacesetter in many ways and left behind a brother, wife, seven children and 17 grandchildren. He died at the ripe age of 80 and will be missed greatly. 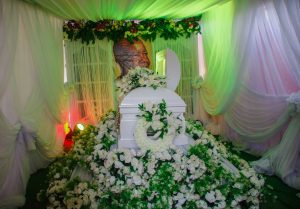 Death is the final stop for life on earth. Death is a mystery from which all men must taste.

Nze Okpala Chude Onyemauche tasted of it on 14th January 2021, leaving behind his brother, wife, children and grandchildren.

Nze Okpala Chude Onyemauche was favoured to go to school amongst his siblings. He went through the school system as obtainable in that time up to the university.

Nze Okpala Chude Onyemauche worked with Firstbank Nigeria Limited after university graduation and for the next three decades. During his service, he sojourned many states and eventually settled in Lagos where he retired.

Nze Okpala Chude Onyemauche was a devoted catholic and held unto his faith till his last breath. He was privileged to pass to glory in the presence of a priest who happened to be his nephew. As a catholic he was actively involved in the development of the church in Ijagemo, Lagos state. He served in various committees and was a father to most parishioners.

He was a member of rotary club of Nigeria Okota district. He rose to become the president Okota district 1998/1999. This position he held faithfully and excelled.

As a man of tradition, he belonged to Uga Improvement Union (UIU) and Awalasi Progress Union, both in Lagos and in Uga, his home town. He rose to become the chairman of UIU and moved the union forward according to his capacity.

Nze Okpala Chude Onyemauche was greatly involved in the establishment of a post office in Uga. The post office is still functional today.

Nze Okpala Chude Onyemauche is survived by his wife, Nwakaego, popularly called ‘Ego’ by Papa. They have seven children and 17 grandchildren.

Kachifo, Papa. Thank you for everything. Ijeoma.

Musings From My Quiet Place – By Dr. Ibe Kachikwu