A Closer Look At The Profile And Achievements Of The New WTO DG, Okonjo Iweala

by Olajumoke Tijani
in News
0

Ngozi Okonjo-Iweala was appointed on Monday to head the leading international trade body as it seeks to resolve disagreements over how it decides cases involving billions in sales and thousands of jobs.

Some of her three key tasks as WTO’s director-general include:

3. Counter protectionism heightened by the COVID-19

Okonjo-Iweala has had a number of landmark achievements on her journey to becoming WTO DG. 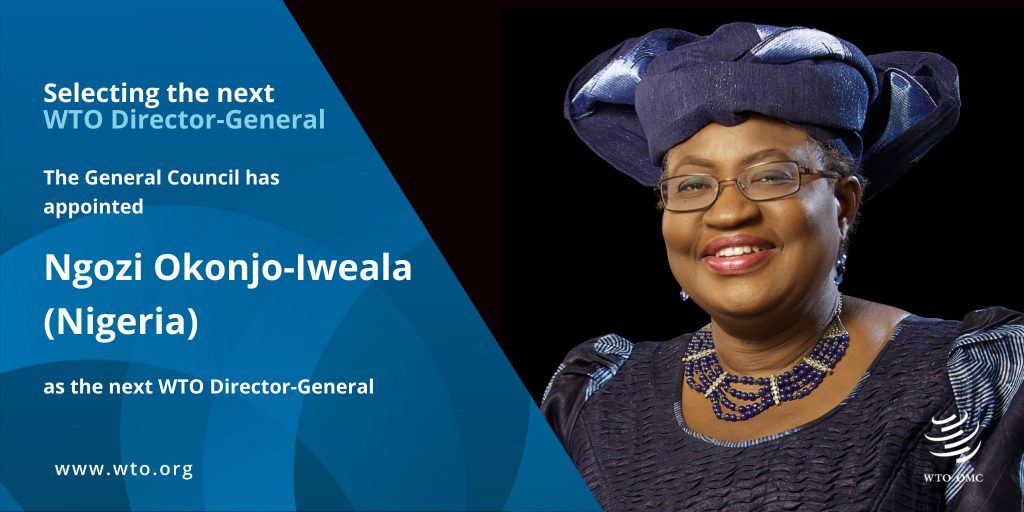 2. Under Obasanjo’s administration, here are some of the things she achieved.

3. Euromoney named her global finance minister of the year in 2005.

4. In 2006 she served briefly as Foreign Affairs Minister making her the first female to serve as both minister of finance and foreign affairs minister.

5. Okonjo-Iweala was re-appointed as Finance Minister with the expanded portfolio of the Coordinating Minister for the Economy by President Goodluck Jonathan in 2011. Here are some of the things she achieved.

7. She also co-chaired the Global Partnership for Effective Development Cooperation.

8. She would have become the World Bank’s first female president in 2012 if she was elected.

9. Okonjo-Iweala was also a member of the International Commission on Financing Global Education Opportunity (2015-2016), chaired by Gordon Brown, and the Eminent Persons Group on Global Financial Governance, which was established by the G20 Finance Ministers and Central Bank Governors (2017-2018).

10. She has been co-chairing the Global Commission for the Economy and Climate, with Nicholas Stern and Paul Polman since 2014.

13. She also founded the Centre for the Study of the Economies of Africa (C-SEA), a development research think tank based in Abuja, and is a Distinguished Visiting Fellow at the Center for Global Development and the Brookings Institution.

14. She has spent over 20 years as a development economist at the World Bank where she rose to the number 2 position of Managing Director, Operations (2007–2011).

15. She has also been serving on the High-Level Council on Leadership & Management for Development of the Aspen Management Partnership for Health (AMP Health) since 2019.

17. In 2020, the International Monetary Fund’s Managing Director Kristalina Georgieva appointed her to an external advisory group to provide input on policy challenges.

18. Also in 2020, she was appointed by the African Union (AU) as a special envoy to solicit international support to help the continent deal with the economic impact of the COVID-19 pandemic.