Davido Flys Out Of Nigeria On Christmas Without Fiancee, Chioma

Nigerian Afrobeat musician, Davido, has been spotted in a viral video going out of Nigeria without Chioma Avril Rowland.

The father of three, is mostly seen with his baby mama in festive seasons but this time around things seem different. In a video sighted on Instagram, he was spotted in a normal hoodie on top of black trousers. However, he entered his private jet alone without the company of his sweetheart Chef Chioma.

Yesterday was Christmas day and all men were with their wives for fun. Also,  It serves as working time for Celebrities to go around the globe give to give off their massive performance. Recall that Davido took to his page to lament how bad Covid19 have hit them.

He canceled his DMW concert and also lost a show he was supposed to do in Jamaica. Ifeanyi’s father, however, was heartbroken with how the coronavirus pandemic has sucked them dry in 2020. 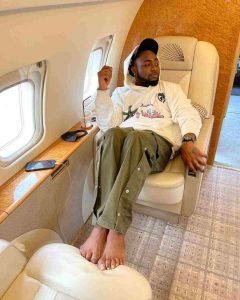 WTO DG, Okonjo-Iweala, Decries Unauthorised Use Of Her Name For Adverts