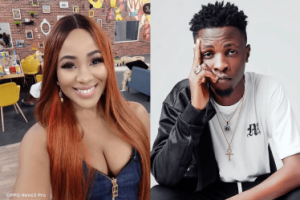 She always rides on other people’s shine to trend. After throwing shades at her former housemate, Nengi, she has revived her dead ‘beef’ with her biggest enemy Laycon.

After the winner of BBNaija 2020, Laycon, was spotted staring at Erica at Dorathy’s birthday party, the latter has taken to social media to shade Laycon.

According to Erica, the fact that the president of the Icons was staring at her doesn’t mean he admires her, but rather he’s surprised she (Erica) survive the traps he set for her.

“Not everyone staring at you is admiring you. Some are amazed you survived the traps they set for you”, Erica wrote on her Instagram story.

BBNaija Neo And Venita Akpofure Unfollow Each Other On Instagram (Photo)

BBNaija 2021: Saga Says He Would Have Rejected DHOH Role For Nini

I Decree Opening Of Churches On Weekdays In Lagos