A Federal High Court sitting in Abuja has authorised the Central Bank of Nigeria (CBN) to freeze the accounts of 20 #EndSARS promoters with immediate effect.

Granting the prayers of Central Bank Governor, Godwin Emefiele, in suit FHC/ABJ/CS/1384/2020, Justice A.R. Mohammed said the apex bank empowered him to direct the head office of each of the banks to “freeze forthwith all transactions on the 20 Bank Accounts listed hereunder and all other bank accounts of the Defendants/Respondents for a period of 90 days pending the outcome of investigation and inquiry currently being conducted” by the CBN.

The court also said the 90-day freezing order, “when it lapses, may be renewed upon good cause shown by the applicant.”

any person, whether artificial or natural, that is affected by this order may apply to the court to have his grievance or complaint heard by the court. The suit is adjourned till February 4, 2021. 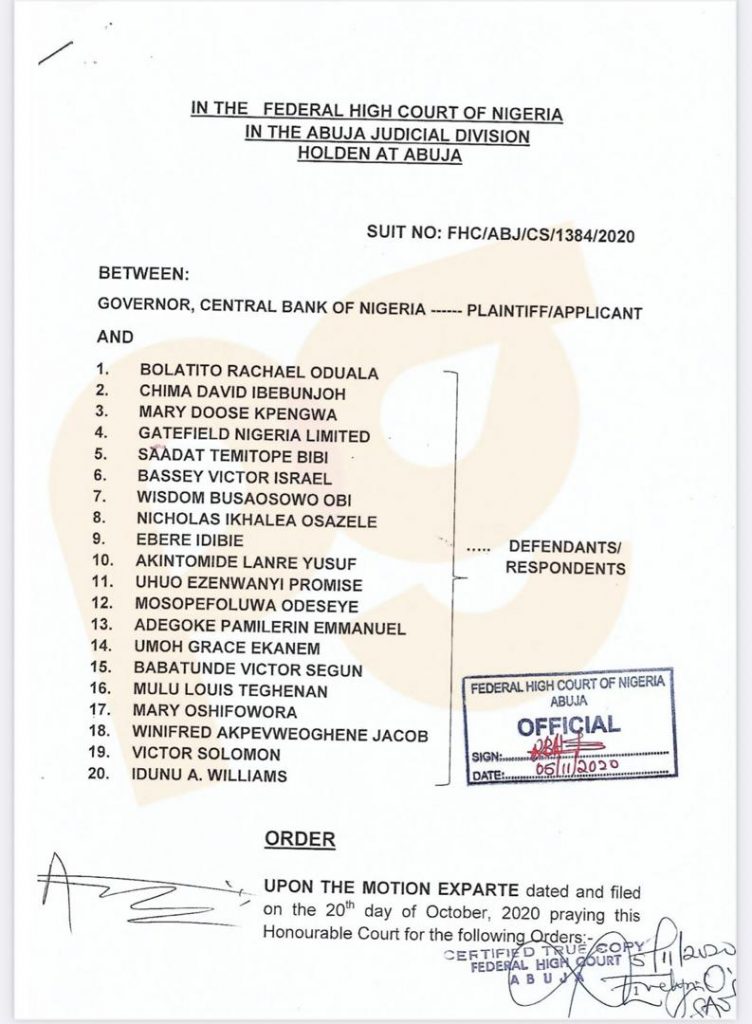 Recall that an #ENDSARS promoter, Modupe Odele, was last Sunday stopped by immigration officials from boarding a plane to the Maldives to celebrate her birthday.

I’m not a full-time activist or human rights attorney. I am a corporate lawyer at the moment, so dealing with police stations isn’t my area of expertise. I did what needed to be done in the face of gross injustice and had the support of over 800 wonderful volunteer lawyers.

Odele said yesterday that the NIS had contacted her to come and pick her passport which was seized on Sunday.

Insecurity: National Assembly Has No Power To Invite Buhari – Malami