Governor Godwin Obaseki has reportedly met with the National Chairman of the Peoples Democratic Party (PDP), Uche Secondus, and Chairman of the party’s Governors’ Forum, Aminu Tambuwal, on Wednesday.

The meeting was reported to have held at the Abuja residence of the Rivers state governor, Nyesome Wike.

Reports revealed that the two PDP leaders and some others in attendance gave the embattled Edo state governor an assurance of their support.

According to a source who spoke on the condition of anonymity was quoted to have said that the meeting was held after a virtual meeting with PDP governors across the country.

It was also gathered that the fates of Obaseki’s deputy, Philip Shaibu, and others who may follow Obaseki to the PDP were also discussed.

Recall that the governor’s resignation followed his disqualification by the APC from contesting the party governorship primary in Edo State which is scheduled to hold on June 22.

The National Chairman of the All Progressives Congress (APC), Adams Oshiomhole, who confirmed the defection of his successor from the party described the development as “good riddance to bad rubbish.”

He also vowed that the ruling party will go to court due to the discrepancies in Obaseki’s certificate should PDP field in the governor as its flagbearer in the forthcoming election. 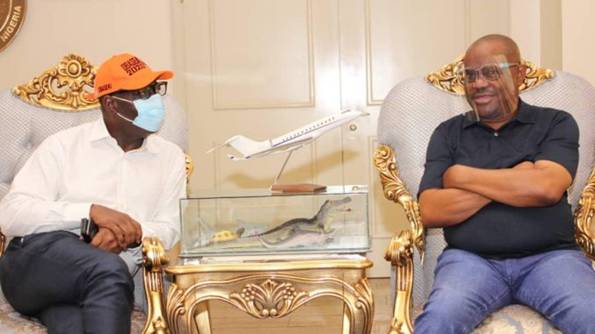 Now, the case has life, so, when they field him, we will be at the court to adopt what PDP filed before the court against him with additional evidence we now have against him. So, we can’t wait to have PDP field him as their candidate.

Meanwhile, with the Court of Appeal upholding the suspension of Adams Oshiomhole as the National Chairman of the APC, the party loyalists have said that it is possible for the Obaseki to return to the party.

Mr Obaseki’s deputy, Philip Shaibu, who also resigned from the APC, was seen in photos and videos released by the Edo Government House, removing APC flag from his office.

11 Things You Need To Know About Nollywood’s Sweetheart, Adesua Etomi