Airports, Schools Shut Down In Beijing Over New Wave Of COVID-19

As authorities seek to contain a new wave of COVID-19 outbreak, Beijing’s airports have cancelled two-thirds of all flights and schools in the Chinese capital on Wednesday.

With fears growing about a second wave of infections in China, the city reported 31 new cases on Wednesday while officials urged residents not to leave Beijing, which had largely brought its outbreak under control.

Thousands of people linked to the new outbreak, believed to have started in the sprawling Xinfadi wholesale food market, are being tested with almost 30 residential compounds in the city now under lockdown.

Reports suggest that at least 1,255 scheduled flights were cancelled on Wednesday morning, with nearly 70 per cent of all trips to and from Beijing’s main airports.

The outbreak had already forced authorities to announce a travel ban for residents of “medium or high-risk” areas of the city while requiring all other residents to take nucleic acid tests in order to leave Beijing.

Meanwhile, several provinces were quarantining travellers from Beijing, where all schools which had mostly reopened have been ordered to close again and return to online classes.

The epidemic situation in the capital is extremely severe. 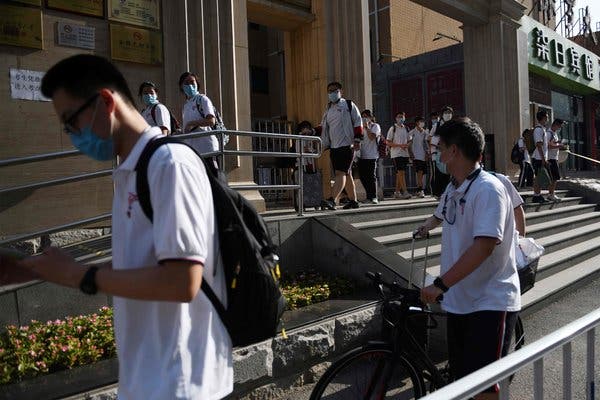 In the meantime, officials have closed 11 markets and disinfected thousands of food and beverage businesses in Beijing after the outbreak was detected.

The city has now reported 137 infections over the last six days, with six new asymptomatic cases and three suspected cases on Wednesday, according to the municipal health commission.

Authorities have so far banned group sports, ordered people to wear masks in crowded enclosed spaces and suspended inter-provincial group tours in response to the outbreak.