The All Progressives Congress screening committee has disqualified Governor Godwin Obaseki from contesting for the party’s sole ticket ahead of the Edo State gubernatorial election slated for September this year.

Obaseki, according to the screening committee, was disqualified from the June 22 governorship primary election in the state, on the ground of defective Higher School Certificate and NYSC certificates.

Apart from Obaseki, the two other disqualified aspirants are Chris Ogiemwonyi and Mathew Iduoriyekenwen.

The screening committee announced the disqualification while presenting its report to the Adams Oshiomhole-led National Working Committee in Abuja on Friday.

Prof. Jonathan Ayuba, the chairman of the panel, while presenting the report, explained that Obaseki was disqualified because the committee could not vouch for the authenticity of the Higher School Certificate he claimed he had but could not produce.

According to the committee, the document he produced only attested to his attendance.

The seven-man screening committee led by  Ayuba said that the report is conclusive, while also adding that all members of the panel signed the report.

Ayuba said the committee was thorough in the process of conducting the exercise, saying that the process was recorded and the unedited recording would be made available to the party.

Earlier on Wednesday, the Governor doubted that he would get re-elected to fly the party’s flag later in the year. This followed the outcome of the screening process which he stated that he had no confidence in.

Since Comrade Adams Oshiomhole is an interested party in this matter, I don’t think I will get justice in this screening but we will wait for the outcome of everything.

Even with the controversial issue from the University of Ibadan, I have my result here with me. 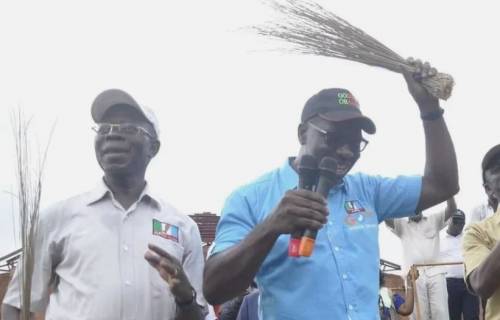 The last time I came here, I asked that Oshiomhole should recuse himself from the process in the interest of peace and justice.

But as a party man, I have had to go through the screening like everybody else.

Since he is the judge and the jury in this matter, I will just wait for the outcome of the screening

I have given them all the information they need; the controversial certificate from the University of Ibadan has been tendered.

I Won't Appeal My Disqualification - Obaseki

What You Need To Know About FMARD AFJP Disbursement Grant

Fani-Kayode Reveals Those Behind Kogi Jailbreak

BBNaija: Erica Confirms She Had Sex With Kiddwaya In The HoH Lounge (Video)