The inauguration of the nation’s yam storage facility has taken off at the Zaki Biam International Yam Market in Benue State.

At the virtual event, Professor Osinbajo said that improving the working and trading for medium-sized businesses through shared facilities, MSMEs Clinics and other government interventions were critical parts of the Nigerian government’s drive towards supporting Micro, Small and Medium Enterprises.

According to Vice President, despite the volume of trade in yam in Zaki Biam, the market had had very little storage capacity and its infrastructure facilities were way behind its capacity and the size of commerce that goes on there daily.

Besides, post harvest losses have been the bane of agriculture production, Nigeria produces 17 million tons of yam annually, but loses up to 40% on account of inadequate storage and processing facilities.”

Following discussions between the Nigerian Government’s MSME Clinics project, the Benue State government and market stakeholders, it was unanimously agreed that this 200,000 capacity Yam Storage Facility should be located right here in Zaki Biam, Benue State,” he explained.

That we are able to commission this project in the midst of the pandemic is especially heart-warming for him.

In 2016, Mr. President asked me to chair an initiative called the MSME Clinics. The idea was to provide a meeting point in every state between regulatory or approving authorities (such as NAFDAC, SON, CAC, BOI, FIRS, etc, and small and medium scale businesses in every State.

So, at such an event the MSMEs bring their problems and challenges to the regulatory authorities, and the authorities can offer on the spot services and advice to MSMEs. This includes advice on how to access credit facilities through the Bank of Industry (BOI).

One of the initiatives of the clinics was the idea of building Shared Facilities for the benefit of small businesses operating within clusters. This is because most individual businesses cannot on their own afford equipment necessary for their businesses. 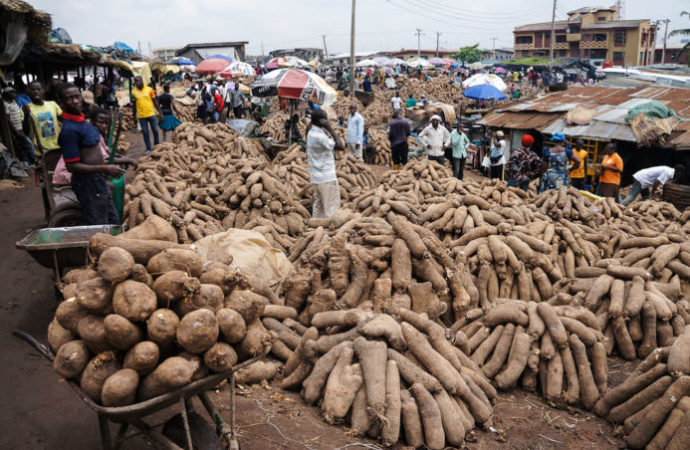 Professor Osinbajo commended the Benue State Governor, Samuel Ortom, “for his leadership and the solid support he has given to this project and to congratulate him on this commissioning of this game-changing project.”

The Zaki Biam Yam market is said to account for about 70% of yams cultivated in the country, with over 200 trucks loading 2 million tubers of yams weekly from the state known as the food basket of the nation.

Presidency Lands Mbaka A Killer Punch, Reveals Why He Called For Buhari’s Impeachment

BBNaija’s Thelma shades Tacha on Twitter as she shows off N2.7M cheque