by TheGistDay
in Op-Ed, World News
0

Last week in faraway America, George Floyd’s death in the hands of four white policemen sparked protests and riots across America that have shaken America to its foundations.

Mr. President Donald Trump sought refuge inside the bunker in the White House! The reactions reminded everyone of the 1968 race riots in the aftermath of Martin Luther King’s assassination. Americans of all colours simply said: ‘enough is enough’ to deaths of unarmed black men in the hands of law enforcement officers! The ‘Black Lives Matter Movement’, which had been ridiculed by establishment America, came to haunt racist America with embarrassing force and vengeance.

In the same week, in Nigeria, a 22-year-old undergraduate student of UNIBEN Miss Uwalia Omozuwa had gone to study in a church building owned by Redeemed Christian Church of God in Ikpoba Hill Edo State. Before the night ended, it was discovered that some scoundrels, sons, or a son of the devil had violated the sanctity of the church building, attacked, raped Uwadia and left her for dead. She was taken to a hospital but ultimately succumbed to her injuries. She was in a coma throughout her stay in the hospital and so could not narrate what transpired. Tears just kept flowing from her eyes. A social media campaign – JusticeforUwa- took off to draw attention to the dastardly act. But sadly, it did not carry the urgency or power of the forces brought together to fight George Floyd’s assassination. Somehow in Nigeria, such deaths have become routine. Life is cheap. Sad. Tragic. How did we descend into such a cesspit?

We read about deaths of over ten, fifteen or seventy persons in a community in Nigeria. We read that some villages in the north are under the control of criminals. They have appointed their own judges and operate outside the framework of the Nigerian constitution. Lives are routinely violated. But we have become immune to the scandal that is impunity. Yet we have a government, a federal government whose duty it is to secure the federation. There are state governors who claim to be chief executives. I remember the Agatu massacre of over seventy souls and the lackadaisical attitude of the IG and the presidency. I remember Ughweru in Delta State and how ten lives were lost to Fulani herdsmen. I remember the lives routinely lost in Abraka to these same herdsmen who have taken to the forests of these largely agrarian communities.

 
The statue of former British prime minister Winston Churchill is seen defaced, with the words (Churchill) “was a racist” written on it’s base in Parliament Square, central London after a demonstration outside the US Embassy, on June 7, 2020, organised to show solidarity with the Black Lives Matter movement in the wake of the killing of George Floyd, an unarmed black man who died after a police officer knelt on his neck in Minneapolis. – Taking a knee, banging drums and ignoring social distancing measures, outraged protesters from Sydney to London on Saturday kicked off a weekend of global rallies against racism and police brutality. (Photo by ISABEL INFANTES / AFP) 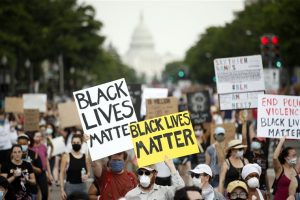 Whereas in America the issue was police brutality on black men, in Nigeria the focus is on security breaches and the failure of the police to effectively protect the people of this country. Across the world, there were protests in support of George Floyd, in support of the black population in the US. There was even a demonstration in Nigeria. But there was no demonstration against the killing of Uwalia and others with a similar fate. At the peak of the crisis, the police chief of Houston asked President Donald Trump to ‘shut up’ if he has nothing to offer to the people of his beloved city! Of course, free speech is guaranteed by the American constitution, which also recognises 17985 police agencies across the country. Most of the heads of these agencies are locally appointed. They are accountable to the people. Not to a distant IG or an ignorant and racially biased President.

Life is life. Death is death. The life of Uwalia like the lives of thousands lost to criminals in any part of the country is as important as that of George Floyd. Yet, the whole world stood still to draw attention to Floyd’s death. When a village of seventy is sacked say in Plateau State or in Taraba, we look on and hope that the nightmare will be over. Indeed, there are many issues crying for mass protests in Nigeria. Strangely the human rights and civil liberties organisations have conveniently gone to sleep. The government has failed the people. The government is complicit. No modern state is run the way the country currently bumbles and fumbles on!

The big point is this: policing is local, should be local. Which is one of the ugliest distortions of the federal system that we run. The unitary system of command and control from the military era has eaten deep into our system. How can Abuja effectively and conscientiously police my hometown of Mereje or Kiagbodo or Kaura Namoda or Nnewi or Shaki especially with the multi-ethnic and skewed system that we operate? We currently run a government that concentrates power in the centre. The centre is inefficient. As a result, the entire nation is inefficiently run. We depend on the resources produced by a section of the country to run the inefficient and prebendal bureaucracy in 774 local and 36 state governments.

The time has come for a rethink of our national life. Nigeria is on the brink. We are wasting the lives of too many young people by inefficiency and backward reasoning. The right things are not being said. The right actions are not being taken. I do not have to be a prophet to say that the current set of rulers will not easily relinquish the powers, which they have exploited for nearly six decades at the expense of the people. Yet, things must change. The lives of all citizens matter. Christians. Muslims. Southerner. Northerner. They are not just figures. They are human beings. Fathers. Mothers. Brothers. Sisters. Cousins. Flesh and blood.

‘Justice’, writes Wole Soyinka, ‘is the first condition of humanity’. But we cannot have justice if the holders of power do not subscribe to the ideals of justice and fair play. The security arrangements do not favour the dispensation of justice. Every life deserves respect. Those murderous herdsmen in bushes across the country should be smoked out. Marauders who sack communities in Kaduna State are not spirits. With the necessary will, they can be and should be brought to justice. Fortunately, the killer of Uwalia has been arrested though his master the pastor is said to be on the run.

All cases of murder should be resolved. Policing should be reorganised in such a way that there is local input. The current policing architecture is not working. It is oppressive, self-serving, and protective of some nefarious interests of the people in Abuja. George Floyd and Uwalia Omozuwa though belonged in different climes and circumstances, were victims of a failed system. Too many young girls have suffered the fate that befell Uwalia. Another rape and death case happened in Ibadan during the week. With one voice, let us tell the Lords of the Manor that ‘enough is enough! If they cannot secure the citizens of this country, they have no business being in power.

Hope Eghagha is a Professor in English and is writing from Lagos.

Buhari Is A Prophet, He Saw Tomorrow - El-Rufai