The Governor of Nasarawa State, Abdullahi Sule, has sacked the Secretary to the State Government (SSG), Aliyu Ahmed-Tijani.

Mr Ahmed-Tijjani was Commissioner for Education in the administration of the immediate past governor of the state, Umaru Al-Makur.

The announcement was contained in a statement issued by the Permanent Secretary (PS), Hamza Gayam, on Monday at the Government House, Lafia.

According to the statement, the governor had directed Mr Ahmed-Tijani to immediately hand over all government property in his possession to the Permanent Secretary, Cabinet Affairs in the Office of the SSG, Muazu Adamu-Gosho.

The statement also said that the governor appreciated the former SSG for his services and support to the administration and wished him well in his future endeavour.

It was gathered that the state House of Assembly ad-hoc committee investigating the release of N1 billion for the renovation/fencing of public secondary schools in the state in 2018, had indicted the former SSG.

According to reports, the state legislators, following the indictment, asked Mr Ahmed-Tijani to refund over N248.5 million as unaccounted funds to the state government.

The house said the former commissioner “displayed blatant inefficiency, incompetency, and ineffectiveness in the performance of his official duties” and urged the governor to relieve him of his appointment.

The move by the governor has been commended by some residents of the state who claim that such efforts would rid corrupt people off the seat of power.

It is, however, expected that a replacement would be announced in the days ahead.

See the statement below: 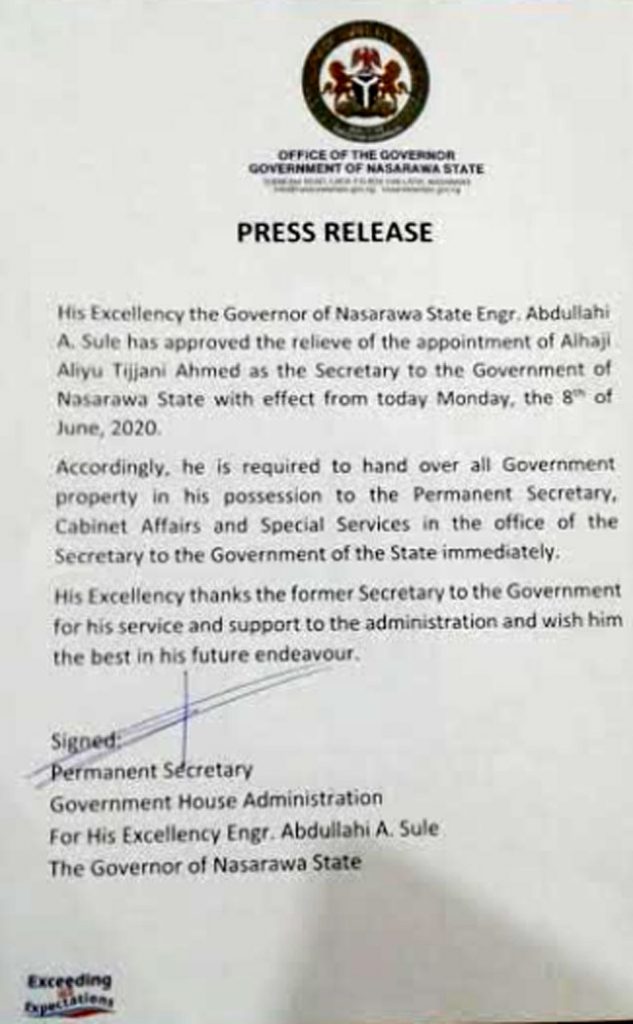 ADDRESS BY H.E. MUHAMMADU BUHARI, PRESIDENT OF THE FEDERAL REPUBLIC OF NIGERIA ON THE COVID- 19 PANDEMIC SUNDAY 29TH MARCH, 2020