The Federal Government has moved the completion date of the Lagos-Ibadan Expressway, Second Niger Bridge and the Abuja-Kaduna-Kano Highway forward, saying that it would now be completed by the first quarter of 2022.

Minister of Works, Babatunde Fashola, speaking during a televised program on Thursday, stated that the delay was due to the coronavirus pandemic.

According to him, the pandemic slowed construction activities and affected government revenues.

As I speak to you now, we have lost essentially the prime of our working period which is the dry season in the Covid period.

We have to regain and recover all of that.

We have also lost some of our expected revenue plans.

At the time Covid hit Nigeria, we were doing 2.59 percent growth rate. Now we are heading for a recession globally and Nigeria will not be insulated from that.

We are working on plans to bring the economy back on track.”

He, however, disclosed that efforts would be made to resume work fully once the Federal Government starts to lift restrictions.

The minister also revealed that about 11 contractors executing 53 projects in 26 states were “remobilised back to site in the first week of the easing of the lockdown.

We had to work with the Governors to allow men and materials to move.

We also had to develop new safety guidelines for the construction. 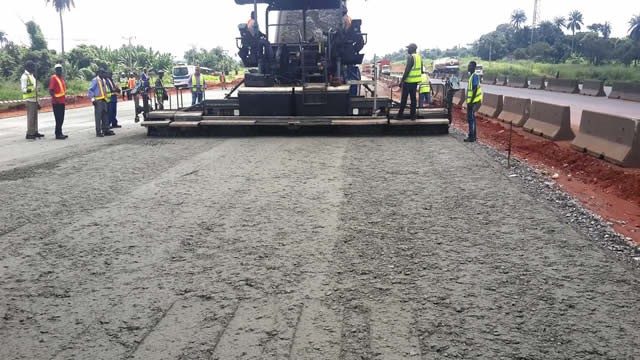 The Lagos-Ibadan Expressway, along with second Niger Bridge and the Abuja-Kaduna-Kano highway, are parts of projects funded under the Presidential Infrastructure Development Fund.

The project, which was awarded to Julius Berger Nigeria and Reynolds Construction Company Limited (RCC), at the sum of 167 billion Naira, was earlier scheduled to be finished in 2021.

In the meantime, Nigerians have decried the slow pace of work on the second Niger Bridge as the prayed that the present administration would not abandon the project at the completion of its tenure in 2023.

Take It Up With God! Khafi Fires Back At Jackye For Condemning Her Diary Sessions

Here Is Why Former Anambra Governor, Obiano, Was Arrested

Kaffy recounts how her ex-husband slept with her best friend