Hon. Ndudi Elumelu, the Minority Leader of the House of Representatives, has asked the board of the African Development Bank (AfDB) to stop harassing its President, Akinwunmi Adesina.

Ahead of his re-election in August, Adesina, a former Minister of Agriculture in Nigeria, has been accused of breaching the bank’s code of conduct.

The United States, the second-largest shareholder of the bank behind Nigeria, asked for a retrial after an AfDB ethics committee investigation found him innocent of the charges.

In a statement on Tuesday, Elumelu, described the allegations against Adesina as “trumped-up,” the same way the embattled AfDB President described the situation.

Calling on the House to investigate the matter, he also urged the Federal Government and African leaders to intervene in the situation.

If this sort of witch-hunt and unnecessary harassment is not put to check and discouraged, it may become a recurring decimal thereby destabilizing the stability the bank has enjoyed for decades and the intended results on a steady decrease.

On Tuesday, Adesina was received by President Muhammadu Buhari at the State House, in Abuja, ahead of his reelection bid.

President Muhammadu Buhari, however, pledged his support for Adesina as he seeks a second term in office.

President Buhari, following his meeting with his former cabinet member, stated via his Twitter handle:

Nigeria stands solidly behind @akin_adesina in his re-election bid as President of the African Development Bank (AfDB). We will work with all leaders, and stakeholders in AfDB, to ensure that he re-elected, on the strength of his achievements during this first term. 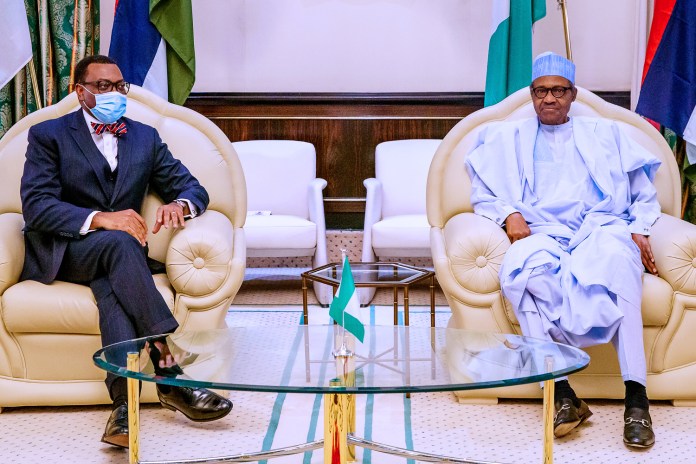 Meanwhile, the AfDB President has received support from a host of African leaders who lauded the achievements of the bank under the leadership of Adesina.

Former President, Olusegun Obasanjo, and other Sierra Leone President, Julius Maada Bio, are among African leaders who have voiced their support for the AfDB president.