According to Bisola, it was her way of taking a break from the craziness in the world and thanking God for her little blessings.

In the wake of all the tragedies the world has faced , people have reacted to it in different ways. Just recently, the former governor of Oyo state, Abiola Ajimobi’s daughter, Abisola Kola-Daisi, took to her Instagram page to share photos of her multi-million naira designer bag collection.

She woke up wanting to take a break from the craziness in the world and decided to rearrange her bags and be thankful for her little blessings.

See the photos below: 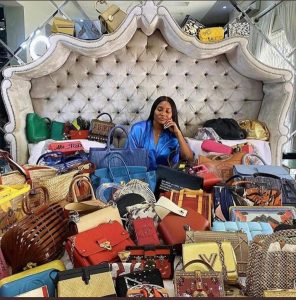 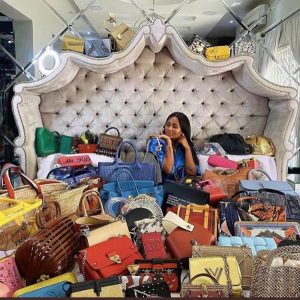 However, the photos led to series of reactions on social media with some people either appreciating the snaps or calling her out for posting such photos when the world is going through a lot at the moment.

An Instagram user called out Abisola by naming some of the crises rocking the world and how she should have used her influence to speak up. The ex-governor’s daughter replied that she has contributed to the discussion and that she decided to take a day off from it.

See their exchange below:

#PostAndDelete – Former Oyo State Governor daughter, Abisola Kola-Daisi, is catching some heat for these now deleted photos she shared on her instagram page.. . . Y’all see anything wrong or nah 🤔

Read other reactions to the photos below:

chynelsky: It’s not her fault. What an obnoxious display of wealth at this time when the world is going through turbulent times. Let her not even lie, she just wanted to show off her bag collection. Money can never buy class!

tomiphilz: People are just overly sensitive! So because things are happening all around, she shouldn’t live her life again? Emphasis on HER LIFE

ms_dorisss: Girl shut up. You lack emotional intelligence. Take a day off by showing us your collection of bags.

pleasure_kay: All these hateful comments are so unnecessary… I mean, it’s okay to take some time off from everything happening around. And if her bags make her happy, By all means she should post them! She’s not obliged to post or talk about anything going on! Her page, her decisions!

Family Debunks Reports On The Cause Of Orisabunmi, Siblings’ Death