As the race for the governorship ticket of the Edo State gubernatorial election heats up, the governor of the state, Godwin Obaseki, has arrived at the National Secretariat of the All Progressives Congress to submit his governorship expression of interest and nomination forms.

The governor, according to fresh reports, went to the secretariat in the company of close aides and a host of supporters.

It was also gathered that Obaseki, upon his arrival at the party secretariat, went into the office of the National Organising Secretary, Emma Ibediro.

This s coming about 24 hours after Obaseki said that he would contest the forthcoming governorship election on the platform of APC no matter the troubles he faces.

Obaseki, speaking about the challenges he has been confronted with as the polls draw near, stated:

When the going gets tough, the tough get going.

The war has become very tough but men would be separated from the boys.

The governor is faced with a tough hurdle as he seeks to emerge as the party’s flagbearer when residents of the state go to the poll to exercise their franchise in the September 19 election.

The camp of Oshiomhole in the state chapter of the party has pitched a former Secretary to the State Government, Osagie Ize-Iyamu, who recently defected from the opposition Peoples Democratic Party (PDP), to jostle with Obaseki for the party’s governorship ticket. 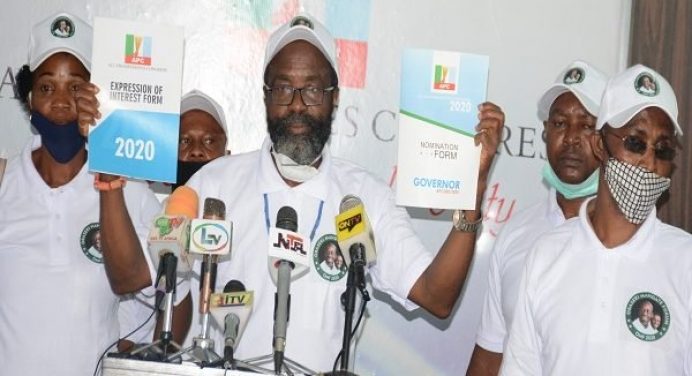 Ize-Iyamu contested the 2016 gubernatorial election in the state under the flagship of the Peoples Democratic (PDP) but lost to Obaseki, who had the support of the former governor of the state, Oshiomhole.

However, a fallout between Obaseki and his political godfather, Oshiomhole, has since seen Ize-Iyamu being paraded as the chosen one for Edo 2020.

The battle for the type of party primary to adopt, in the meantime, has further worsened the situation between the former governor and the incumbent, with party chieftains wading into the issue to save the future of the party in the state.