US President, Donald Trump, has threatened to deploy the military across the country to quell the George Floyd riots and ‘dominate’ the streets.

President Trump stated this on Monday at the White House Rose Garden, just as explosions from tear gas canisters and helicopters were heard in the background due to protests at the nation’s capital.

The US President called on mayors and governors to establish “an overwhelming law enforcement presence until the violence has been quelled,” while he threatened to ‘deploy the United States military to quickly solve the problem’ should they fail to do as he said. 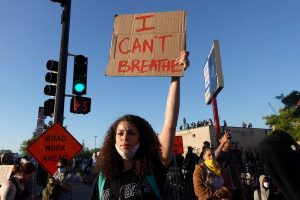 I am mobilising available federal resources, civilian and military, to stop the rioting and looting, to end the destruction and arson. And to protect the rights of law-abiding Americans, including your Second Amendment rights.

Today I strongly recommended to every governor to deploy the National Guard in sufficient numbers, that we dominate the streets.

Trump, after his statement, walked to St John’s Church for a photo session as law enforcement agents cleared protesters out of the way and deployed tear gas.

Moments later, Trump was photographed alone posing with a Bible in front of the church.

The president briefing was in reference to a video call he made Monday morning to governors in which he demanded they arrest violent protesters and jail them for ten years.

Trump was quoted to have said:

You have to dominate, if you don’t dominate you’re wasting your time. They’re going to run over your, you’re going to have to look like a bunch of jerks.

Washington was under very good control, but we’re going to have it under much more control. We’re going to pull in thousands of people.