President Muhammadu Buhari has agreed to wade into the crisis ravaging the All Progressives Congress, APC, especially in Edo State, to prevent it from blowing out of control and hurting the party’s chances at the September 19 governorship poll in Edo.

The move, according to a source, was one of the decisions taken at a meeting between President Buhari and Edo State Governor, Godwin Obaseki, who visited and informed the President of his decision to seek re-election.

The source said that following Obaseki’s visit to Aso Villa, the President assured him of intervening in the crisis.

The source, who was at the meeting, stated:

The President has intervened in the crisis between Governor Obaseki and Oshiomhole. The President equally promised to meet with the APC national chairman.

Governor Obaseki has been at war with his immediate predecessor and APC National Chairman, Adams Oshiomhole, over his re-election bid.

The feud has led to factionalization of the APC in Edo to two camps, with the Obaseki faction in favour of indirect primary, while the camp loyal to Oshiomhole is insisting on direct primary as approved by the National Working Committee of the APC. 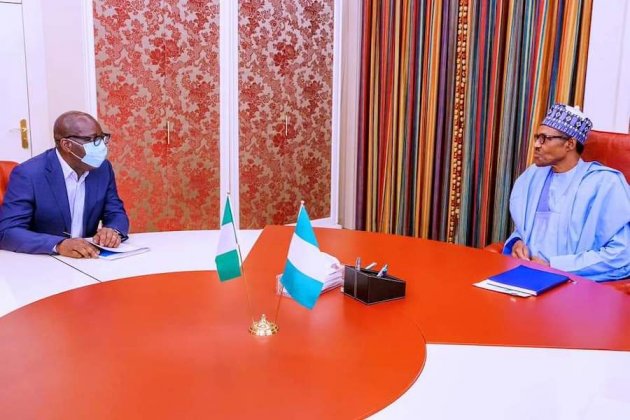 Governor Obaseki and seven other APC governors, on Sunday, met National Leader of the APC, Asiwaju Bola Ahmed Tinubu, at State House, Lagos, over the issue. Sources at the meeting said the former Lagos State governor was in favour of direct primary.

From the Lagos State House meeting, some APC governors met with the party’s NWC, on Monday, where Comrade Oshiomhole insisted that the party would go ahead with the direct primary during its June 22 governorship primary in Edo State.

Oshiomhole spoke shortly after a closed-door meeting with seven governors of the party, an action party sources said is a continuation of efforts to resolve all disputes ahead of the forthcoming primary of the party in Edo State.

Passport Issuance To Be Fully Digitalised Before End Of 2022 – Aregbesola

Kaffy Opens Up About Divorce From Husband Joseph Ameh