The Flames of Minneapolis: A Dark and Twisted Expose into Racism in America

by Paul Olele
in World News
0

This week, the whole world watched yet another video of an unarmed black man murdered by a police officer. Only this time, it hit the ceiling for many black Americans, who have consistently endured racial animosity from the police force.

The man’s name was George Floyd, a 46-year-old man originally from Houston, Texas, who had relocated to Minneapolis, Minnesota a couple of years ago. His life was brought to an abrupt end when Derek Chauvin, a former police officer, proceeded to kneel on his neck after Floyd began gasping for air and begging for his life. Floyd was later pronounced dead moments after that incident. 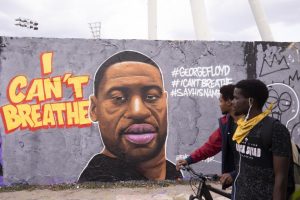 I am not going to go into all the details that led to the police encounter with George Floyd because quite frankly it is irrelevant to say the very least. This problem is bigger than George Floyd, Trayvon Martin, Sandra Bland, Tamir Rice, Mike Brown, Akai Gurley and even Philando Castile. The problem is systematic white supremacy and this was seen as millions took to the streets to rebel against 400 years of systematic oppression from the dominant society.

The riots in Minneapolis tells the two different stories. One side details reports from black activists, who are on the frontline, while the other shows stories from the mainstream media outlets, who have propagated lies to further cause commotion and create a demonizing narrative towards black Americans.

For example, a news reporter in Minneapolis who works for KSTP named Richard Reeve was caught playing fake gunshot sounds on his phone while reporting live on the news as a way to further incite violence.

A @KSTP 5 Eyewitness Reporter was caught playing FAKE GUNSHOTS on his Cell Phone at the Minneapolis Protest AND THEN BLAME IT ON BLACK PEOPLE. When confronted, he admitted and acted like he didn’t know it would “be a problem”. This is just pure shame.
Video credit Amun Abdibile pic.twitter.com/u5fU8WAXMd

convince me this guy that started shit at autozone windows is not a COP pic.twitter.com/zmirgedQkD

Another false narrative pushed out by the media is looting. The mainstream media for years have always associated the looting narrative with black people and in this case, it is absolutely false. The vandalism in Minneapolis started from a white man, who was covered with a face mask and protective gear. Many on the ground allegedly claim that man was Jacob Pederson, a Minneapolis police officer.

The calls for justice from black Americans have consistently fallen on deaf ears as police officers have been able to murder black citizens for years with impunity. The riots in Minneapolis represent a group of people who are fed up with the constant attacks from an establishment that is meant to serve and protect its people.

Black people have made several previous attempts to communicate their suffering in various forms of peaceful protests, but it seems like America would rather let a city burn in flames in order to maintain systematic white supremacy.

RED | For Africa is Redefining Work Culture on the Continent

Kate Henshaw Narrates Painful Experience With A Woman At Event