Evading the Looming Food Scarcity; A Panacea for Africa

by TheGistDay
in Economy, Op-Ed
0

More than 60 percent of the population of sub-Saharan Africa is smallholder farmers, and about 23 percent of sub-Saharan Africa’s GDP comes from agriculture. Yet, Africa’s full agricultural potential remains untapped. With 75% of the world’s poor in rural areas and most of them being dependent on farming, agriculture must be part of world economic growth, poverty reduction, and environmental sustainability (UNDP, 2012).

The coronavirus pandemic has become a setback for many businesses, in achieving their target, nevertheless agriculture remains critical to achieving global poverty reduction targets and it is still the single most important productive sector in most low income countries, often in terms of its share of Gross Domestic Product (GDP) and almost always in terms of the number of people it employs.

In countries where the share of agriculture in overall employment is large, broad-based growth in agricultural incomes is essential to stimulate growth in the overall economy, including the non-farm sectors selling to rural people. Hence, the ability of agriculture to generate overall GDP growth and its comparative advantage in reducing poverty will vary from country to country.

The majority of the poor and food insecure in Africa live in rural areas, and most of them depend on agriculture for their livelihoods. To support broad-based poverty reduction and food security in Africa, smallholder agriculture must be a central investment focus. 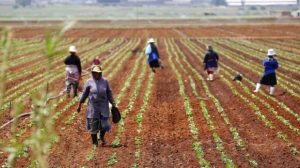 According to the World Bank 77.7 per cent of Nigeria’s land is arable and capable of producing key (cash) crops, including beans, sesame, cashew nuts, cassava, cocoa beans, groundnuts, maize (corn), melon, rice, millet, palm kernels, palm oil, plantains and rubber, amongst others. Nigeria also has quality manpower to complement the fertile land mass and drive the Sector, judging from her teeming population of able-bodied youths.

The potential of agriculture to generate a more pro-poor growth process depends on the creation of new market opportunities that most benefit the rural poor. Nigeria is a vast agricultural country “endowed with substantial natural resources” which include: 68 million hectares of arable land; fresh water resources covering about 12 million hectares, 960 kilometres of coastline and an ecological diversity which enables the country to produce a wide variety of crops and livestock, forestry and fisheries products.

Poverty in Nigeria is concentrated in rural areas, which are home to more than 70% of the nation’s poor. Development indicators for rural areas lag behind those for urban areas: incomes are lower, infant mortality rates are higher, life expectancy is shorter, illiteracy is more widespread, malnutrition is more prevalent, and greater proportions of people lack access to clean water and improved sanitation services. It is necessary to attract investors to take a look at this sector, in a bid to curb the danger of food scarcity ahead, should the pandemic persist.

Food is a basic necessity which is needed by many and will continue to be demanded, no matter the crisis.Therefore, it is important that farmers be prepared to deal with diverse orders and even working with governments in order to satisfy a possible surge in food demand.

For now, and in the foreseeable future, the effect of the coronavirus to food production are minimal. Therefore, what does this entail for the future of farmers in Nigeria?
This is the set time for those who will be in the position to feed the future, to prepare for the market demands that will come with post-coronavirus in Nigeria.. Many jobs will be affected and the economy may take time to recover, the farmers will be opportuned to benefit from the crisis.
In addition, the agricultural sector may become one of the most lucrative employers which means, those seeking to recover from the COVID-19 financial crisis may need to adjust to a new normal of being in the food supply chains.

Proper application should lead to ensuring national food security as the foundation for a sustainable form of economic prosperity. This means government and corporate investments in the sector should focus on

According to Mr Akinwunmi Adesina (president of the African Development Bank (AfDB) and previous Minister of Agriculture for Nigeria), agricultural industrialisation is the necessary ingredient to transform rural areas in Nigeria/Africa, from zones of economic misery to zones of economic prosperity. Heavy investment in the sector has to be sustained and sustainable using inclusion, policy drives and technology. Routes to exportation should be made easier to encourage commercial inclusions. As he opined, agriculture is not a way of life, agriculture is not a development activity, agriculture is a straight line business.

As of 2017, Africa was spending €30 billion a year importing food. If nothing is done, that is going to reach €93.5 billion by 2030. If the table is turned, this means that farmers and value chain entrepreneurs/corporates in Africa have a chance of earning €50bn+ over the next 10 years. This means agriculture would help reduce Africa’s dependence on foreign aids and such to drive its own economic prosperity.

Nigeria has a GDP of $446.543 billion (nominal, 2019 est.) $1.181 trillion (PPP, 2020 est.). For a nation with its potential and population, this is relatively small. Encouragement of PPP in specific areas of production would also be a great boon to supporting the growth and development of the sector. Policies may appear draconian and would be met with resistance but over the long term it would prove hugely beneficial for food security and sustainability. Nigeria/Africa’s economic future has been give a great opportunity because of this pandemic; an opportunity to achieve prosperity by leverage on own resources beyond external aids.

Long term trade contracts should be developed and executed. Commercial security is an important step in ensuring sustainability. Select cash crops should be given focus and support especially in food processing and production.

Akinwumi Adesina – The Trials of an Unapologetic Pan-Africanist