by Emmanuel Onminyi
in Business, Economy
0

The President the African Development Bank (AfDB), Akinwunmi Adesina, has expressed gratitude to stakeholders of the Bank for the support he has gotten in the face of a probe into the 15 allegations of improprieties levelled against him by a whistleblower.

An unidentified whistleblowers accused the 2013 Forbe’s Africa Person of the Year of handing contracts to acquaintances and appointing relatives to strategic positions.

The proposed investigation comes three months before the bank’s annual meeting, at which Adesina is the sole candidate to extend his five-year term.

Adesina in a statement released in the wake of the probe stated:

In recent weeks and over the last few days, especially. I have been overwhelmed by the tremendous support received from around the world. I have absolute confidence in the Bank that I lead and its governance system, rules and procedures.

In spite of unprecedented attempt by some to tarnish my reputation and prejudice the Bank’s governance procedure, I maintain my innocence with trumped up allegation that unjustly seem to impugn my honour and integrity as well as the reputation of the Africa Development Bank.

I sincerely appreciate the support of the Bank’s shareholders.

At this time, I remain confident that ultimately and as one collective, the bank will emerge stronger than before and continue to support Africa’s development. I draw great inspiration from my heroes, Nelson Mandela and Kofi Annan, whose lives have shown that through pain we grow. As Martin Luther King Jnr once said, “The arc of the moral universe is long but it bends towards justice.”

I am confident that fair, transparent and just processes that respect the rule of law, procedures and governance system of the Bank, and rule of law will ultimately prove that I have not violated the Code of ethics of this extraordinary institution.

I will therefore continue to work with each and every one of our stakeholders to ensure that African Development Bank maintains its hard earned global reputation; and our credible and well-functioning institutional and governance systems are reinforced, as we collectively press on to fulfill the mission of our founders to accelerate and transform Africa’s development.

See copy of press statement below: 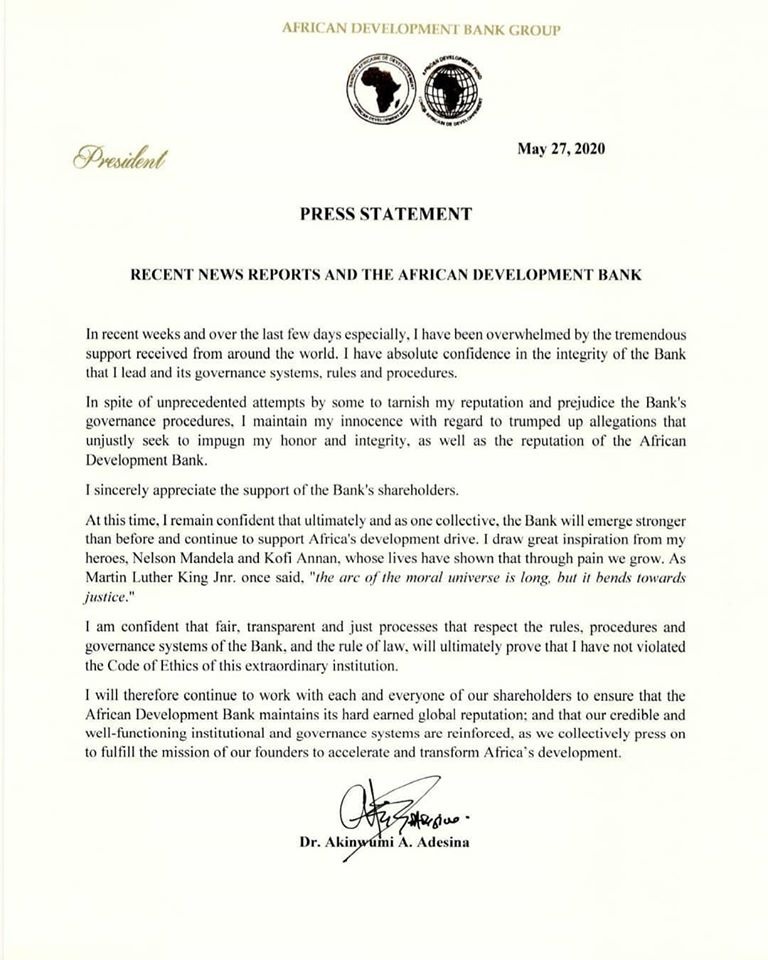 University Education Is Not For Employment, Says ASUU UNILAG Chairman