The Federal Government has announced the evacuation of 292 Nigerians who were stranded in Saudi Arabia following the lockdown caused by the COVID-19 pandemic.

Their arrival was announced on Wednesday by the Minister of Foreign Affairs, Geoffrey Onyeama, via his official Twitter handle.

According to the Minister, the flight conveying the evacuees touched down late on Tuesday night at the Nnamdi Azikwe International Airport, Abuja.

Onyeama revealed that the majority of the evacuees are nursing mothers and children.

We received 292 evacuees stranded in Saudi Arabia yesterday. The Saudi Government transported them to Abuja. A large number are nursing mothers and children and they are all comfortably settled in hotels under the mandatory 14 days quarantine. #COVID19 #PTFCOVID19.

Meanwhile, as part of its efforts to evacuate Nigerians who are stranded off the shores of the country due to the outbreak of the pandemic, the Federal Government, about two weeks ago, evacuated no fewer than 300 Nigerians from the UK.

Report further suggested that a total of 160 Nigerians were also evacuated from the United States and 256 others from Dubai.

In the meantime, the Minister has said that Nigerians in France, who plan to fly to Cotonou, Benin Republic, and then access the country through its land border can do so.

Onyeama, explained that the country would absorb evacuees based on the resources available for their 14-day mandatory quarantine. 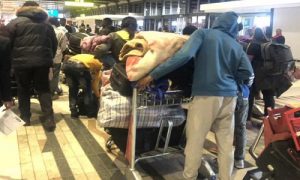 If they have already bought their tickets and have boarded or about to board the flight, when they get to Cotonou, we will as in the past liaise with our Charge d’Affaires, and look at the capacity available to process them from Cotonou. But there’s certainly no guarantee that they would’ve immediate access to the country until such a time as they can be absorbed.

Recall that the Presidential Task Force on COVID-19 recently stated that the Nigeria National Petroleum Commission (NNPC) and the Central Bank of Nigeria (CBN) would cater for the welfare of the evacuees as part of their Corporate Social Responsibility.

Afrobeat Musician Lagbaja Reacts To Birthday Greetings, He Said "May 19 Not My Birthday"

Protest Rocks Akure As Commercial Drivers, Farmers, Others Back Akeredolu’s Ultimatum To Herdsmen