Following the conflicting order restricting the movement of essential workers amid the COVID-19 lockdown, the Lagos State branch of the Nigerian Medical Association has directed its members to sit at home from 6 pm today, Wednesday, May 20, 2020.

In a statement signed by the Chairman, Dr Saliu Oseni and the Secretary of the association, Dr Moronkola Ramon, the NMA condemned the comment of the Commissioner of Police in Lagos State who stated that essential workers, including doctors and other health workers, are not exempted from the restriction.

We have observed that despite the directive of the President of the Federal Republic of Nigeria, President Muhammadu Buhari, through the Presidential Task Force on COVID-19, which was clear on the exemption of essential workers including doctors and other health workers from the ongoing lockdown movement restriction.

The Commissioner of Police in Lagos State, Mr Hakeem Odumosu, has been issuing conflicting directives on social and mainstream media to effect that essential workers including doctors and other health workers are not exempted.

According to the body, this confusion, it stated, has led to the harassment and intimidation of its members and other health workers, including stopping an ambulance from conveying a patient from getting to its destination.

As a direct result of the conflicting directives of the government and Lagos State Commissioner of Police, the Lagos State branch of the Nigerian Medical Association (NMA), was inundated yesterday (Tuesday, May 19, 2020) evening with several cases of harassment and intimidation of doctors and other health-workers by officers and men of the Lagos State police command on the direct order of the commissioner of police to the extent that even ambulances carrying patients with emergency cases were impounded.

The NMA has resolved that it is presently unsafe for members to continue to provide healthcare services under the arrangement.

Until a written statement is issued by the government and police authorities stating in clear terms the status of essential workers as the curfew enforcement continues, the association vowed that its members will not go back to work.

All medical doctors in Lagos State are hereby advised to proceed on a sit-at-home, in their best interest starting from 6 pm today Wednesday, May 20, 2020, indefinitely, until otherwise advised.

See copy of statement below: 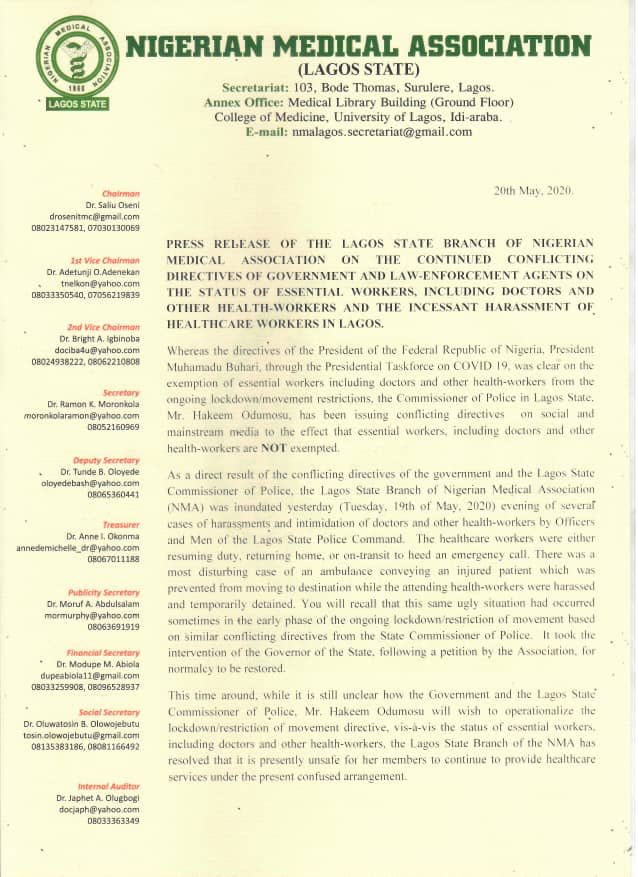 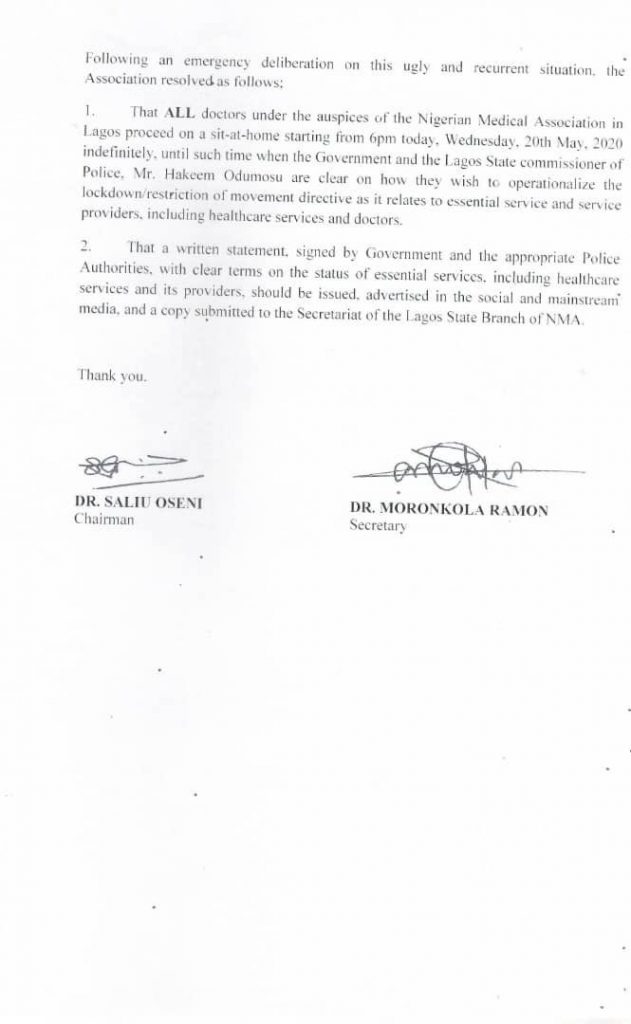