Dated May 11, 2020, the query was issued by the Head of the Civil Service of the Federation, Dr Folasade Yemi-Esan, saying that the attention of President Muhammadu Buhari’s had been drawn to misconducts by the Permanent Secretary.

It was learnt that Bello, during his time at the Ministry, failed to pay eligible contractors despite the budgetary release of N98 billion to the Ministry of Agriculture in 2018.

He was also alleged to have used the entire 2019 first-quarter release of N7 billion to pay for the 2018 contracts that were already funded.

The attention of Mr President has been drawn to the acts of serious misconduct against you in your former post as the Permanent Secretary in the Federal Ministry of Agriculture and Rural Development on which he has given further directive. 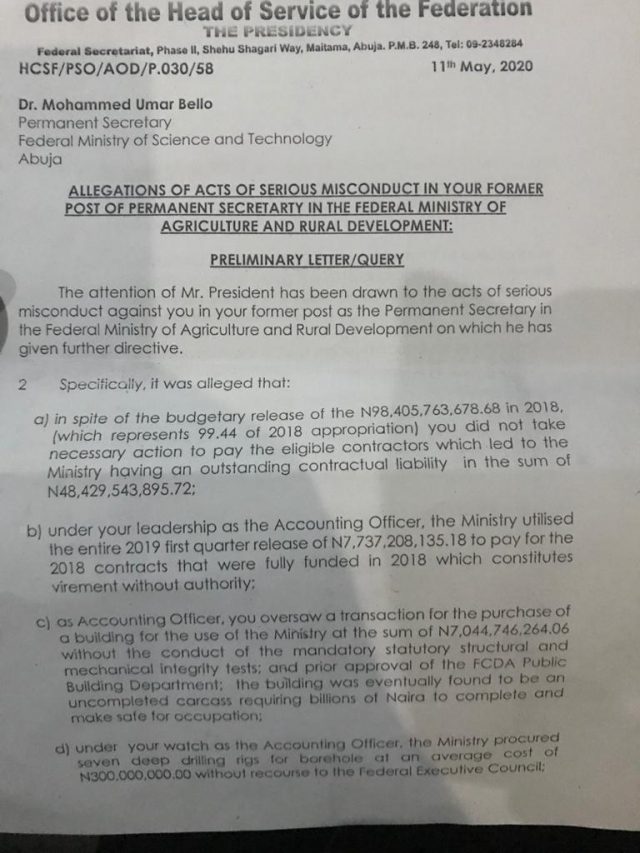 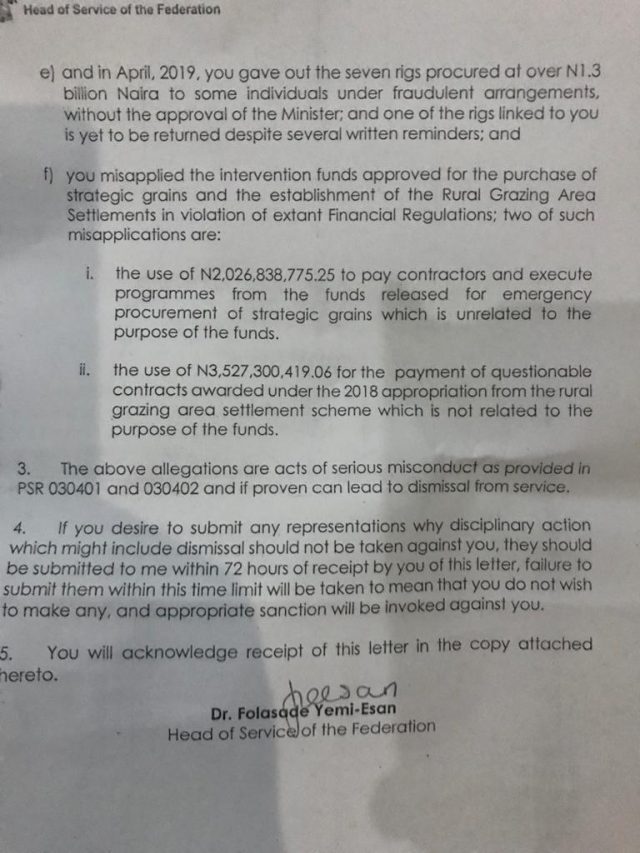 Under your leadership as the Accounting Officer, the Ministry utilised the entire 2019 first-quarter release of N7,737,208,135.18 to pay for the 2018 contracts that were fully funded in 2018 which constitutes virement without authority.

As Accounting Officer, you oversaw a transaction for the purchase of a building for the use of the Ministry at the sum of N7,044,746,264.06 without the conduct of the mandatory statutory structural and mechanical integrity tests; and prior approval of the FCDA Public Building Department; the building was eventually found to be an uncompleted carcass requiring billions of Naira to complete and make safe for occupation.

Under your watch as the Accounting Officer, the Ministry procured seven deep drilling rigs for borehole at an average cost of N300,000,000.00 without recourse to the Federal Executive Council.

And in April 2019, you gave out the seven rigs procured at over N1.3 billion to some individuals under fraudulent arrangements, without the approval of the Minister; and one of the rigs linked to you is yet to be returned despite several written reminders; and you misplaced the intervention funds approved for the purchase of strategic grains and the establishment of the Rural Grazing Area Settlements in violation of extant Financial Regulations.

Zenith General Insurance’s Profit Before Tax Rises By 16% To N3.67bn