Recently Teresa Oyibo Ameh the initiator of  Aunty Talatu foundation gave out her Covid 19 and Ramadan palliative to the children of Arome Mercyland  orphanage Home Suleja and the palliatives (which included books) were received on behalf of the children  by the founder of the Home Hajia Yele. This is a regular practice of the foundation which she started in 2006 .

‘ It all began at the outpatient section of hospitals, I just felt this need to reach out to children because the average child is always scared of going to the hospital, it all started as a kind of therapy where we sang , danced and read stories’

Aunty Talatu  as the children love to call her is today an author of eight books for children, she runs a library project with two orphanages and also has a book club in her house for children. She is also involved in other initiatives for the girl child. 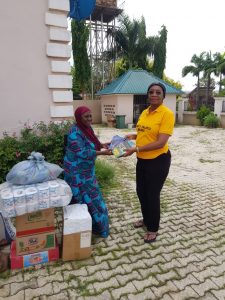 ‘My passion lies in children. I wrote a book in 2017, about the girl child in the North East, what she has to go through. it’s all about a girl losing her father and her twin brother who went to school in federal government college, Boni yadi. Her mother lost her mind and she went to the IDP camp where she was taken advantage of and impregnated.

After writing that book, I started thinking about what I should do about vulnerable girls who cannot take of themselves, lost their parents and found themselves pregnant and had lost everybody. That’s why I started the empowerment scheme for the girl child. The first one was very successful and they are still doing it in a school in Dutse Alhaji, a nomadic school. We taught them how to string beads and I took some of the beads to the United Nation’s CSW and they were all bought.

The good thing was that these girls were trained and when I went back to the school I discovered they were training other girls. So it now has a ripple effect, if we trained ten girls and they’ve been able to train twenty, invariably thirty girls have been trained.’

‘ I write for children and since they can’t afford to buy books, it is difficult to get them to read, children may love books but most  parents find it difficult in buying school prescribed books, to most of them buying story books isn’t on their list of priorities  ’.

Edo Steps Up Measures To Contain Second Wave Of COVID-19

Buhari Does Not Interfere With NNPC Operations – Kyari