by Christian Pulisic
in World News
0

The Chinese ambassador to Israel, Du Wei, has been found dead in his home north of Tel Aviv, according to the Israeli foreign ministry and police.

No cause of death was given, and Israeli police on Sunday said it had opened an investigation.

According to local media citing unidentified emergency medical officials, initial indications are that he died in his sleep of natural causes. 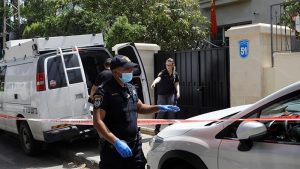 Du Wei had been China’s ambassador to Ukraine before taking up the position in Israel,

His unexplained death came just days after he criticized comments from US Secretary of State Mike Pompeo who denounced Chinese investments in Israel and accused China of hiding information about the coronavirus pandemic.

Kenya Denies Involvement In The Arrest, Extradition Of Nnamdi Kanu

Company Disburses N100m As Salary Advance To Workers In 6 Months.