We Have Received N792 Million – PTF

As some Nigerians donate resources to ensure that the country wins the war against the COVID-19 pandemic, the Presidential Task Force, PTF, has announced that it has received N792 million from various donors to assist ongoing efforts to tackle the disease.

Making this known at the daily PTF briefing on Friday, the Chairman of the Task Force, Boss Mustapha, stated that the cash donations were separated from non-cash donations made by several individuals and groups.

According to him, the donations from individuals, development partners, religious bodies and corporate groups have been credited into the Treasury Single Account, TSA.

For effective coordination and accountability, the Office of the Accountant General published five bank accounts into which donations could be paid and swept into a CBN TSA account, daily.

I am pleased to report that the OAGF has published the details of inflow into the FGN COVID-19 Eradication Support Accounts. As at (of) 14th May 2020, the sum of N792,121,613.89 (Seven Hundred and Ninety Two Million, One Hundred and Twenty One Thousand, Six Hundred and Thirteen Naira and Eighty Nine Kobo) has been credited into the TSA account from various in-country sources.

While also commending the efforts of Nigerians in fighting the ongoing pandemic, Mustapha said:

I particularly want to commend the sacrifice of some ordinary Nigerians typified by the donations as low as one naira, which for us comes from the purest of hearts. 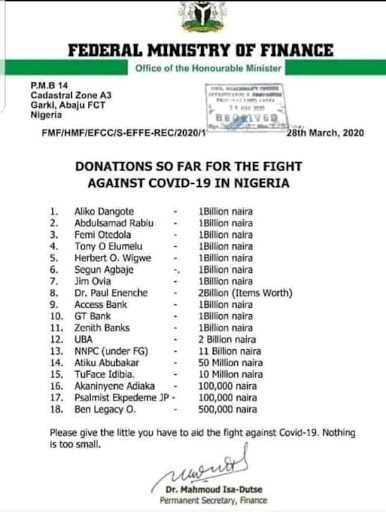 He had on April 9 said that the task force will not be directly involved in the collection and disbursement of the cash donations for the sake of transparency and accountability.

However, he said that all non-cash donations shall be duly received by the PTF, acknowledged, documented and appropriately deployed.

It is, however, unknown if this fund is different from the billions of Naira donated by wealthy Nigerians and corporate organisations when the Federal Government called for public support.

Mike Tyson is Back! Will Face Roy Jones in an Eight Round Exhibition Fight