A report making the round has exposed the alleged corrupt practices of the Speaker of the Lagos State House of Assembly, Mudashiru Obasa, reportedly approved the sum of N258m for the printing of invitation cards for the inauguration of lawmakers two months after the event had been held.

The document, according to Sahara Reporters, explicitly stated that the fund was processed on the orders of the Speaker for the inauguration of the Ninth Assembly with 34 returning members and six new members, which was held on June 7, 2019.

It was further gathered that the document, which was used for the approval and release of the funds, was fraudulently processed two months after the event held.

The document was titled “Celebrations and Ceremonies” and was dated August 7, 2019.

Being payment approved for the printing of invitation cards during the inauguration of the 9th Assembly as per Hon. Speaker’s approval vide LSHA/LM/C/276.

The N258m scandal is the latest in a series of reports on the corrupt activities of the Lagos Assembly Speaker, who, it was learnt has continued to siphon public funds through various means.

The reports have also exposed how Obasa has been using a series of companies owned and linked to him to receive various sums from the State’s Assembly. 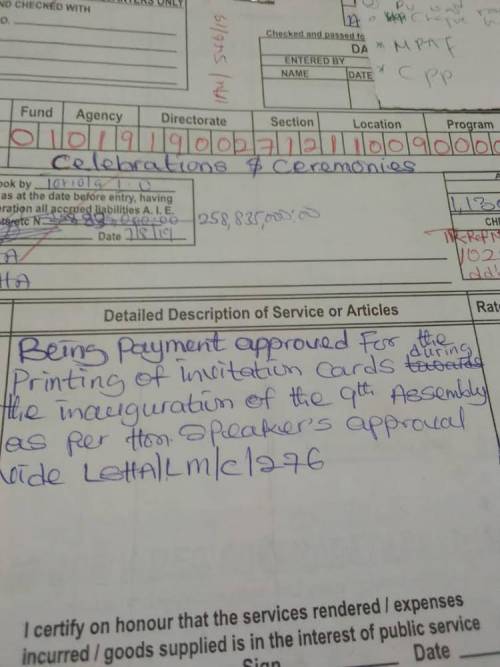 The Speaker, it was earlier revealed, collects N17m monthly from the Assembly to maintain his personal residence and guest house and also got N53m from the state coffers to travel with his mistress to the United States of America.

Meanwhile, as part of efforts to stop the exposure of his fraudulent act, Obasa, it was alleged, paid N50m to some thugs to set ablaze the Civic Media Lab and also resorted to smearing campaign against the online news publication.

Recall that Obasa was at the forefront when the Lagos State House of Assembly probe the former governor of the state, Akinwunmi Ambode, over allegations of corrupt practices.