by Paul Olele
in Op-Ed
0

In a series of events that have taken place this week in the United States, Black Americans have been forced to once again deal with the unfortunate racial targeting and execution from the police force.

In New York City, the police department has come under fire for assaulting black people under the guise of social distancing. Pictures have circulated all over the internet showing the racial disparity in the NYPD’s enforcement of social distancing in the city.

In one picture, the NYPD police officers can be seen handing out face masks to white people in a crowded Gantry Park in Long Island City, Queens, New York City, while the other picture shows NYPD police officers assaulting a black man, who they claim was disobeying social distancing orders in Manhattan. 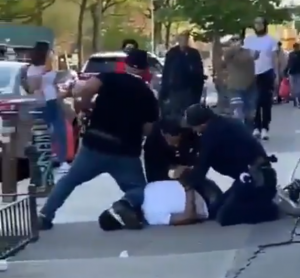 The brutality displayed by the cops in New York recently led to the suspension of an officer named Francis X. Garcia, who was caught on film punching an innocent black man, who tried to intervene in the arrest of a friend, who was pinned to the ground by other police officers.

The social distancing debacle has also shown more racial bias in other states across the country, particularly in Michigan, where white protestors congregated in large numbers with guns to vehemently protest the social distancing orders implemented by the governors. At these protests, the police officers were present at the scene, but there was no brutal enforcement displayed on citizens who disobeyed the stay at home orders.

In California, white protestors disobeyed social distance orders by heading to the beach to protest against the statewide lockdown measures. According to NBC News, there was a “Fully Reopen California Now” demonstration at Huntington beach. This protest came after the California Governor, Gavin Newsom ordered beaches in Orange county closed after a recent mass gathering on the sand during a recent heat wave.

The protests at Huntington beach yielded no arrests from the police force.