North Korea’s leader, Kim Jong-un, has resurfaced in public, refuting unconfirmed reports that he was in grave danger after undergoing heart surgery.

The North’s state news agency said that Kim appeared on Friday during a ceremony at a factory in the city of Sunchon.

He had last appeared publicly on April 11, as there were speculations about his health and about who would take over the hermetic, nuclear-armed country should he become incapacitated or die.

Concerns about his wellness heightened after Kim missed the state’s celebrations of his country’s biggest holiday on April 15; the day the North marked the birthday of his grandfather Kim Il-sung, the country’s founder.

Further rumours about his absence in public claimed that Kim was “in grave danger,” and in a “vegetative state” after botched heart-valve surgery, or in quarantine after contracting Covid-19, with other reports claiming that China had sent doctors to Pyongyang to save him.

The North Korean news agency, after its initial report on Saturday, released photos showing a smiling Kim applauding, cutting a ribbon and standing with his hands behind his back at a new fertilizer factory. 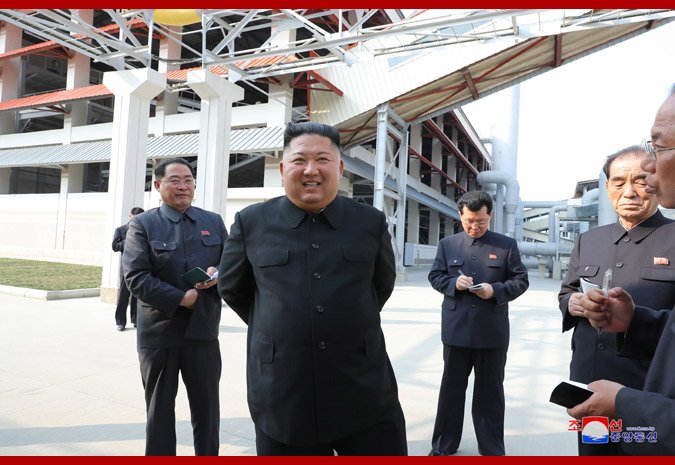 The news agency said that participants at the event burst into thunderous cheers while Kim “warmly acknowledged the builders and masses raising thunderous cheers” and went on to tour the factory, accompanied by senior officials from the ruling Workers’ Party and his sister, Kim Yo-jong.

Although no outside media was apparently allowed to witness the ceremony, the report by the North’s official Korean Central News Agency followed a familiar pattern, as it typically reports Kim’s public appearances a day after they take place, carrying photos from the scene as well.

According to reports, the South Korean government did not immediately comment on the report but it has pushed back against the recent speculation that Kim was in poor health.

Its Unification Minister, Kim Yeon-chul, had called the reports fake news, saying that South Korea could “confidently” say that there was no evidence to confirm the rumours.