An Adamawa-based radio and television service, Gotel Communications Limited, owned by a former Vice President of Nigeria, Atiku Abubakar, has sacked about 51 of its staff.

Prior to this move, Gotel Communications had in 2016 carried out a mass retrenchment after which it placed others on renewable contracts.

According to a source, the sacked workers, mostly contract staffers of the local TV and radio stations, stated that no reason was given for their dismissal but the action was linked to the recent merging of all the businesses of the politician.

He revealed that Abubakar had last year merged all his businesses into a single group known as Priam Group, and that the Group would bring all his investments under one brand and one common management.

It was learnt that Priam Group was expected to take over assets and liabilities of the existing companies including staff emoluments and other welfare.

Meanwhile, the source said that since the merger, some Indians were brought in to take over the management.

Perhaps it was part of their business strategy to reduce the workforce.

Whatever it is all about, it is unheard of to have a big media outfit without any single permanent staffer.

The source said after a mass retrenchment in 2016, some of them were retained but later made to sign a five-year contract with Gotel.

The sack came halfway into the five years contract engagement they signed with Gotel Communication.

Suddenly we were served letters terminating our appointments with an instruction that we return every property that belongs to the company while leaving, and that our entitlements, including payments due to us in lieu of the sack notice, would be computed and paid into our accounts.

A letter on the latest action by Gotel Communication, signed by the General Manager, Muhammed Elyakub, reads:

The management has decided to discontinue your service with immediate effect.
Consequently, please be informed of the following:
1. Your entitlements, including stipends lieu to the notice, will be computed and paid into your account with immediate effect.
2. That, while leaving you are expected to return all documents, assets, and properties of Gotel Communications Limited in your possession (including your ID card)
Management acknowledges your service in the company and wishes you all the best in your future endeavors. 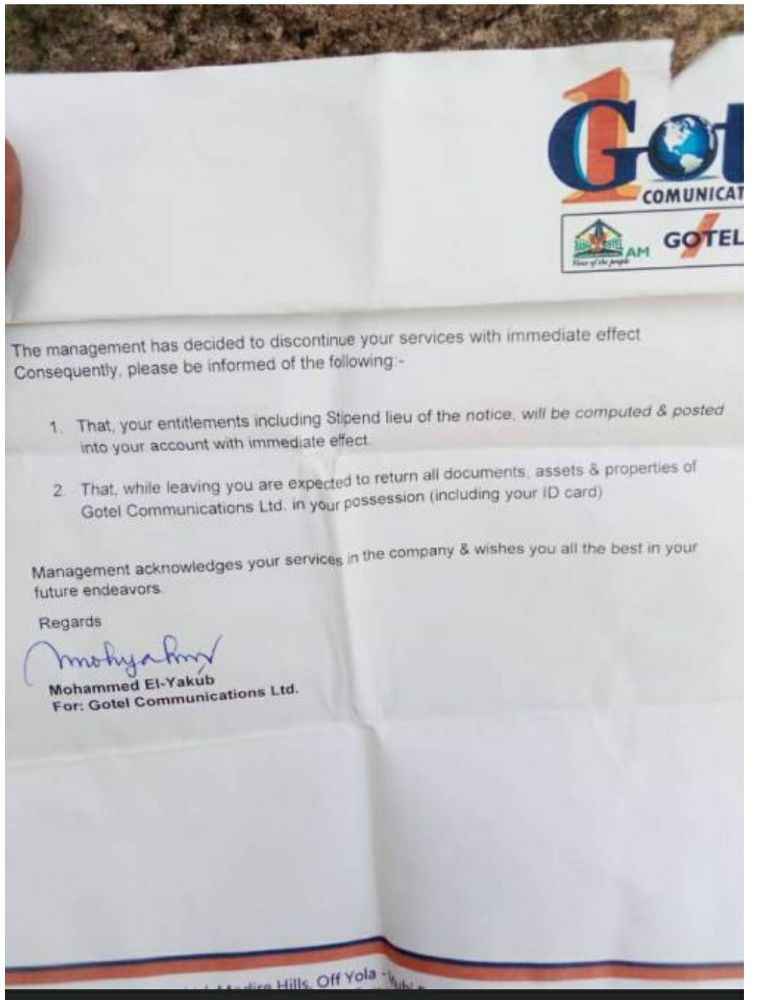 Elyakub said that the mass sack was a result of an ongoing rationalisation policy of the company under the new management.

He stressed that all the former vice president’s businesses are now under the Priam Group, and it is the new policy thrust of the management to shelve the workforce.