There is renewed hope for Nigeria’s fight against the novel Coronavirus (COVID-19) as researchers from the University of Benin have produced a clinically tested ventilator.

As the figure of COVID-19 patients grows by the day, the Federal Government is in the race to curb the spread of the pandemic in the country as it has sought support from international bodies to fight the pandemic.

Revealing this in a statement signed and dated April 28, 2020, the Public Relations Officer of the institution, Mrs Benedicta Ehanire, revealed that the ventilator was produced by a team of researchers from the Faculties of Engineering and Medical Sciences of the institution.

The statement noted that the invention is in response to Vice-Chancellor, Professor Lilian Salami’s call for experts in the institution to put UNIBEN’s name among the very best Universities in the world.

Explaining that the group, known as the COVID-19 initiative, considered the peculiar circumstances of the country, the leader of the team, Professor Kessington Obahiagbon, said that the ventilator is produced to function for at least an hour without electricity.

While expressing her joy over the development, the Vice-Chancellor expressed gratitude to the team for looking inwards in ensuring that a solution is proffered to the global crisis.

The feat by the team is coming at a time when there is a clamour for the Federal Government to rise up to the fight against the pandemic which has claimed the lives of thousands of persons across the world.

Nigerians, barely 24 hours ago slammed the Federal Government after Senegal developed a one-dollar test kit and 3D ventilators which are geared towards fighting the pandemic in the West African country; a development that has earned the Senegalese government worldwide commendation.

Recall that the Federal Government also came under fire after approaching US businessman and owner of Tesla, Elon Musk, to donate ventilators to Nigeria.

In the meantime, Nigerians have applauded the feat achieved by the researchers from the UNIBEN; calling on the Buhari-led administration to support local industries. 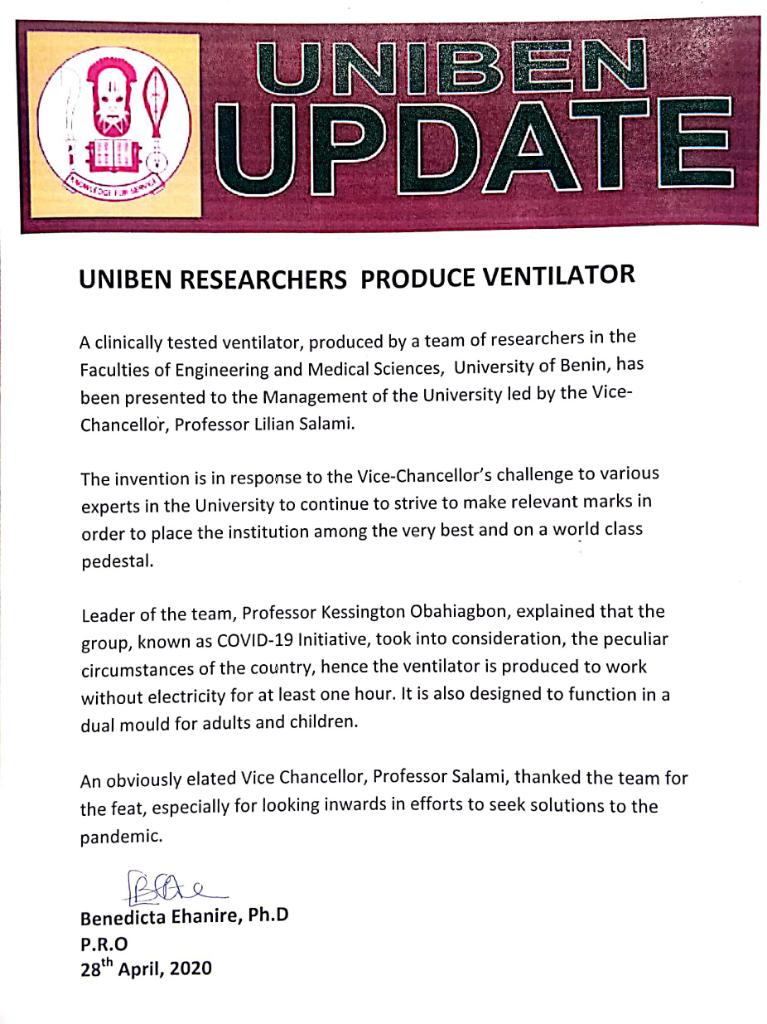