Nigerian governors have advised President Muhammadu Buhari to relax the lockdown that has been in place in parts of the country in the last month in an effort to curb the spread of coronavirus.

They advised the president to impose interstate restriction but allow intra-state movement while also recommending continued restriction on large gatherings and compulsory use of face masks in public places.

The call is coming as the nation expects further action from President Buhari as a four-week lockdown imposed on Abuja, Lagos and Ogun States by the president comes to a close on Monday.

Their recommendations are contained in an April 24 memo to the Secretary to Government of the Federation, Boss Mustapha.

The letter, according to reports, was signed by the Ekiti State governor and chairman of the Nigeria Governors’ Forum, Kayode Fayemi.

Governor Fayemi said that the memo followed a teleconference meeting with Vice President, Yemi Osinbajo, on April 22, where governors were asked to suggest what they want to be reflected in the expected presidential pronouncement, to have a coordinated response across the country.

Recall at that meeting, it was agreed that the Nigeria Governors’ Forum (NGF) articulates the issues that it would want to be included in the next Presidential Pronouncement on Covid-19 so as to have a Uniform and Coordinated Policy on Covid-19 at both the national and sub-national levels.

The governors called for nationwide inter-state lockdown that excludes movement of essential supplies such as foods, beverages, medical and pharmaceuticals, petroleum supplies and agricultural products. 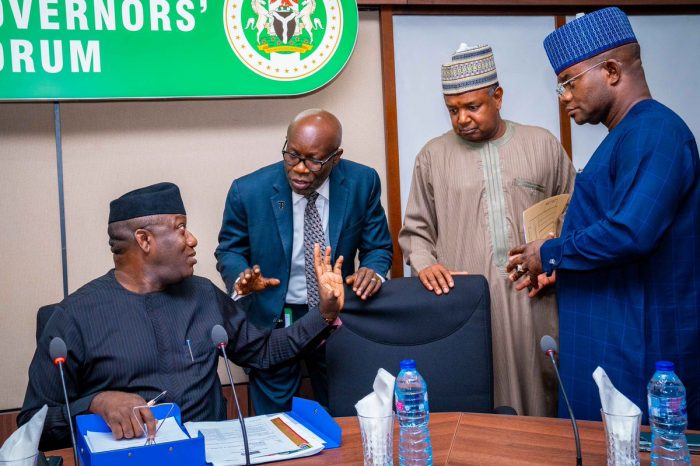 They also recommended internal free movement but with restrictions on large gatherings and assemblies, overnight curfews, lockdown of flights, and compulsory use of face masks/coverings in the public.

Sources familiar with the development revealed that the forum had, during the virtual meeting with the VP called for the decentralisation of the activities of the COVID-19 response from federal to local governments to curtail the further spread.

After a month under lockdown, many Nigerians have advised against extending total restriction to minimize suffering but it is not clear if President Buhari would accept the governors’ recommendations if he receives it.

Meanwhile, Willy Bassey, who speaks for the SGF, said he was not aware of the letter containing the recommendations.

BBNaija 2021: Liquorose Lists The Genuine Friends She Made On The Show