The death has been announced of Mallam Modu Sheriff. He is the father of a former Governor of Borno State, Ali Modu Sheriff.

In a statement through his official Facebook account, the Governor Babagana Zulum stated that Modu Sheriff died in the early hours of Thursday in a fire incident which happened at his Damboa road home in Maiduguri.

“Inna lillahi wa inna ilayhi raajiun! Borno has lost another prominent elder statesman, Galadima Modu Sheriff. I was at Baba’s family residence here in Maiduguri, very early today, to share the grief of our parents, brothers and sisters, and to pay my respect.

“Our thoughts and prayers are with the late Galadima and the grieving family. May Allah forgive his shortcomings and admit him into aljanna firdaus! Amin thumma amin,” 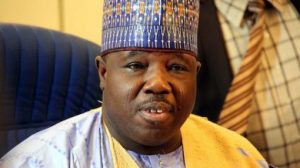 His son, Senator Alli Modu Sheriff was a two-time governor of Bornu State between 2003 and 2011

US Includes Nigeria To Blacklist On Religious Freedom