LDR: Banks increase loans to private sector by N2.57 trillion in one year

by Olawale Joseph
in Coronavirus, Economy
0

The Loan-to-deposit ratio of the Central Bank of Nigeria (CBN) appeared to be yielding some results as analysis of data published by the apex bank revealed that loans to private sector increased by N2.57 trillion in one year (March 2019 and February 2020).

Out of the total N36.66 trillion net credit in the domestic economy, loans to private sector rose to N26.69 trillion, while loans to government also rose to N9.96 trillion.

That is, in the Nigerian economy, credit to private sector constitutes 73%, while credit to government constitutes 27% of the total net domestic credit. 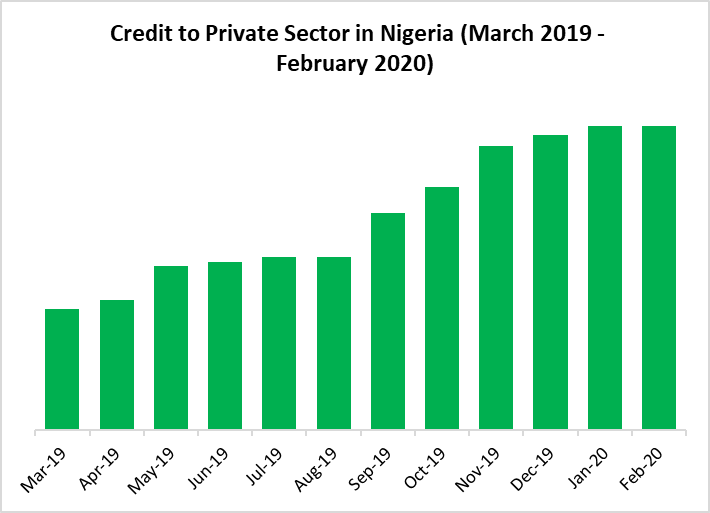 A closer look shows that credit to government dropped by N483.2 billion between September and February 2020.

The period under review was characterized with several policies introduced by the Central Bank, one of which is the review of the LDR aimed at boosting credit private to induce double digit growth in the economy.

According to the CBN, one of the major reasons for the newly revised LDR was the noticeable growth in the level of the industry gross credit. Meanwhile, there were media reports that Banks have continued to lower their lending and deposit rates as they struggle to comply with the apex bank’s December 31, 2019 deadline.

Fast forward to 2020, while the Central Bank was anticipating a sustained growth in Q1 2019, the global economy has been ravaged with a deadly disease, novel Covid-19, which has disrupted several economies of the world.

What next for the CBN?

Although, criticisms have trailed the current 65% LDR ratio, as experts argue that it might increase the level of non-performing loans in the economy. Meanwhile, recent data released by the Nation Bureau of Statistics (NBS) showed that the Nigerian banking industry witnessed a significant 41% decline in non-performing loans (NPLs) in 2019.

The decline in banks’ NPL ratio is due to two possible factors: increase in loan recoveries and loan write-offs. This is according to Chudi Achara, a Management Associate at First Bank of Nigeria Limited.

“Many DMBs learnt from the crude oil price crisis of 2014-2016. During the oil boom, financing Oil and Gas was seen as more profitable. Therefore, banks put a huge percentage of their loan portfolios in that sector. Recently, banks have learnt to diversify into other sectors such as manufacturing and export. Focusing on financing short- term trade transactions rather than long term transactions has helped.

“More so, CBN’s recent focus on financing the real sector by increasing LDR to 65%, has seen banks lend more in recent times. This has increased the gross loans, with reference to the last MPC communique. And as you may know, the higher the increase in gross loans (as compared to Increase in NPL) will also reduce the NPL ratio.”

Following the continued spread of Covid-19 in Nigeria and the world, Oil and Gas sector remains one of the hard-hit and most vulnerable sectors. As at the time of filing this report, oil price has dropped from $61.68 in January to $26.36 a barrel in April with building oil inventory.

It remains tricky how the CBN will rescue the Oil and Gas and other vulnerable sectors as Deposit Money Banks would not fancy granting loans to investors to avoid building another block of bad loans.

2023: Why Peter Obi will never become next president – Fr Mbaka