The spate of violence in Nigeria, following the stay-at-home directive of governments in several parts of the country is about to get to another height as youths in Sapele, Delta State, have sworn to clampdown on men of the Nigerian Police Force in the state over the killing of another youth.

In a video released on social media, a resident, while expressing his grievances over the killing, stated that the full wrath of the youths will be meted on any policeman found in their locale, while also saying that they do not want the police anymore in the country.

Ruing the Federal Government’s inability to provide them with palliatives in the course of their stay at home, the angry youth stated in the one minute, thirty seconds video that the police will be paid in the same coin.

Following the extrajudicial killing, angry youths in the area thronged out in large number to protest the killing of their comrade, as they armed themselves with sticks. 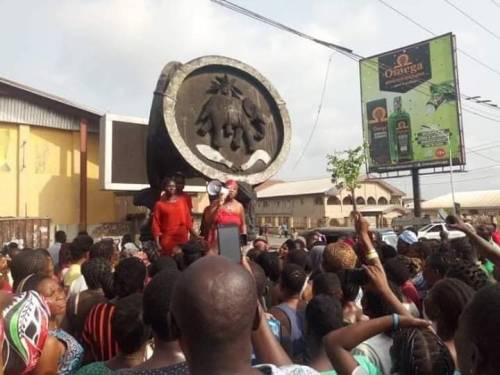 Although the bone of contention between the unidentified policeman and deceased is unknown as at the time of filing this report, this development is coming on the heels of the protest by women of Sapele over the stay-at-home directive of the Governor Ifeanyi Okowa-led government.

The protest which held at McPherson road, Sapele, saw several women coming out to object the governor’s directive, even though it was aimed at curbing the growing figure of the COVID-19 pandemic in the state and the country at large.

According to a statement released by the Governor Okowa last week, he assured the people of the state of his government’s commitment to curb the spread of the pandemic, while calling for their support.

As part of the statement, the governor said:

I, therefore, want to urge our people to avoid all forms of stigmatization, and the best corporation we will have from the people, we want those who may fall ill to truly identify themselves in the best interest of the people. Anyone could be exposed; anyone could be infected; both the high and the low, the rich and the poor. So, it is for all of us to continue to obey the rules and praying also that God will intervene in the situation in our State, in our nation and the world over.

Sanwo-Olu Reveals How Much Lagos Needs For Infrastructural Development