by Christian Pulisic
in National, News
0

President Muhammadu Buhari Friday in Abuja felicitated with Africa’s richest man and President of Dangote Group of companies, Alhaji Aliko Dangote, describing him as a foremost industrialist, investor, and philanthropist.

In a released statement by his  media adviser, Mr. Femi Adesina, hailed what he described as “the large-heartedness of Africa’s wealthiest man.”

The presidential spokesman quoted the president as further describing Dangote as a person who had always proved his mettle whenever necessary, recalling his contributions to the fight against Ebola, polio and the current COVID-19. 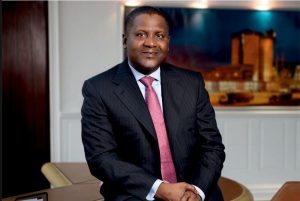 On the occasion of his 63rd birthday anniversary, President Muhammadu Buhari felicitates with foremost industrialist, investor, and philanthropist, Alhaji Aliko Dangote, wishing him and his loved ones a splendid day.

The President salutes the large-heartedness of Africa’s wealthiest man, noting that it is one thing to be so blessed, and another to use the wealth to the glory of God and for the good of humanity.

According to the statement,

“Alhaji Dangote has always stood to be counted whenever it mattered, judging by his generous contributions to the fight against polio, Ebola disease, the current Coronavirus, and many other challenges which have faced Nigeria, and indeed, the African continent.”