The Federal government on Wednesday has approved 70,000 metric tons of grains from the nation’s strategic grains reserve for immediate distribution to the poor in the country.

The Presidential Task Force on the Coronavirus pandemic, headed by the Secretary to the Government of the Federation SGF, Boss Mustapha, announced this on Wednesday during its regular daily briefings.

According to the SGF, the 6000 metric tons will be distributed to Lagos, Ogun and the Federal Capital Territory where the current lockdown is being implemented.

Mustapha further disclosed that the team had received reports from the Federal Road Safety Corps, FRSC, on inter-state traffic across the country as at Tuesday, 31st March, 2020. 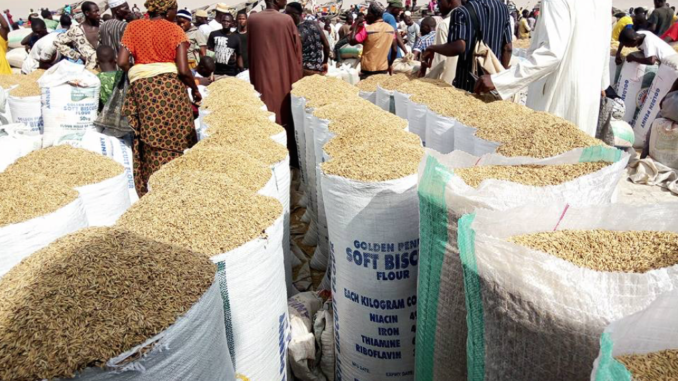 The SGF state: “Indications are that there was a reasonable level of compliance with the Presidential directive which has led to great reduction of traffic on major highways.

“We have however received reports of challenges arising from the enforcement of the Presidential directives by security agents generally and in States where Governors have also imposed their own measures.

While he assured that the team will encourage dialogue to remove the bottlenecks, Mustapha said: “PTF has developed an Implementation Guide and Protocols for the COVID-19 Lockdown Policy.

“This document will be widely circulated to all security agencies and will be discussed with sub-national entities for the purpose of building synergy in the fight against the virus.”

Meanwhile, the Minister of Health, Osagie Ehanire, who updated the nation of the latest infection statistics, said 70% are males, while 30% are females

He also stated that the government had directed ports health services officials to be deployed to land borders to boost screening at the borders.

According to him: “So far, over 2 000 persons have been tested, while test sites have been increased to 7, even as he urged qualified Laboratory technologists to volunteer their services.”

A report by the Nigeria Centre for Disease Control, via its verified Twitter account, Nigeria at 12:30 pm 1st April there are 151 confirmed cases of COVID-19 reported in Nigeria.

Coronavirus: Fear As Cases Of Virus Increase In Nigeria