AIG Chris Olakpe: A Loss So Deep And Painful.

by Christian Pulisic
in Opinion
0

Numbness has taken over my entire being. In the last twenty four hours, reality and disbelief have been at war in my brain. It is practically impossible to process the shocking news and accept the reality now staring me at the face. God what is happening? Can somebody wake me up to tell me this is just a dream, a nightmare? Less than three months a go, I lost a man who inspired me on the path of self discovery and fulfillment. We have not even buried him. Now this? What is going on?

Please pardon me if you’re not making sense of all I’m saying. There are certain things that happen to you and cause your brain to shut down. What the journalists call the “writer’s block”; when your creative and writing abilities simply refuse to function. 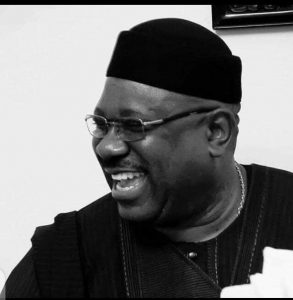 The news of the death of Chief Christain Olakpe, retired Assistant Inspector General (AIG) of Police, the Afituwou of Irri Kingdom, former Chairman and CEO of the Lagos State Transport Management Authority (LASTMA), former Police Public Relations Officer of the Nigerian Police and most importantly my elder cousin and benefactor has shut down my entire being.

How do I start to write about the death of a man who has been a constant in my life’s journey. God used him to set me on my career path and whatever I have been able to achieve today. From that fateful day in August of 1990 when I met him for the first time at the Police Officers Mess at the GRA Benin till two days before his death when we spoke on the telephone; he never showed any sign of illness, AIG Chris Olakpe, was a senior brother in every sense of the word. He will call to rebuke me if he has not heard from me for a long time – like he did last Thursday. He will send words of prayers and praise when he heard of an act of kindness or support showed to any member of the family or the Idheze community, as he taught me to always do. He accepted and took my wife like his own daughter, calling her “my daughter, the original woman of God”. In return, my wife called him “My Original Idheze Daddy” on account of their affinity. She has been inconsolable since I broke the news to her.

My life odyssey with Uncle Chris started in August 1990 when a mutual Uncle of ours Mr. Friday Ogwegha, took me to see him at the Police Officers Mess in Benin. He was a Chief Superintendent of Police (CSP) then and I had just graduated from the University of Benin. After the courtesies and Uncle Friday told him I just graduated from UNIBEN, he first bragged about his alma mata, the University of Nigeria Nsukka and asked why I chose to attend an “inferior” University. This resulted in general laughter amongst us. But after the initial “gragra” he got serious and asked what my result was. On hearing that I came out with a second class upper degree, he jumped up in excitement and immediately decreed that I must join the Nigeria Police, explaining how he was going to get the Form for me to commence the process of getting into the Nigeria Police College for a Cadet ASP course.

You could feel the agony of disappointment all over him when I quietly but calmly told him that I was not interested in joining the Police Force. After regaining his composure, he asked me what career I wanted to pursue. I told him I wanted to be a journalist. That seemed to excite him as he gave a proud endorsement of my choice of career. He said apart from joining the Police Force, the other thing he would advise me to be is a journalist. He said Journalism was his second choice of career apart from being a Police man. And he immediately swung into action. He brought out his complimentary card and scribbled a message on it, signed it and handed it over to me.“Go to Concord Newspapers in Lagos, ask for Mr. Mike Awoyinfa, give this card to him. He will give you a job”, he said, signaling the end of the meeting and asking Uncle Friday and myself to join him at the Bar to have a drink.

That was how my journey into journalism started. I did meet Editor Mike Awoyinfa and he did give me a job. Ever since then, Uncle Chris has been my alter ego. You can now understand when I said I have lost a senior brother.
Rest In Peace Uncle Chris Olakpe and may the good Lord comfort everyone that is grieving, especially your immediate family, as a result of this painful and untimely death.

5 things anyone investing in Nigeria’s creative industry should know

Made in Nigeria, Only for Nigerians

Paul Okoye Celebrates His Twins As They Clock 4

BBNaija Shine Ya Eye: Maria Accuses Yerin Of Peeping To See Her Naked In The Bathroom