The new isolation and treatment centre set up by the Lagos State government in partnership with Nigerian multinational financial institution, Guarantee Trust Bank, GTB, at the Mobolaji Johnson Arena (formerly Onikan Stadium), as an additional measure to handle the Coronavirus (Covid-19) pandemic, is near completion.

Lagos State Governor, Babajide Sanwo-Olu, had announced on Tuesday that more isolation centres would be built in the event that more cases are recorded in the state.

This, according to the governor, is to make the centres closer to the people in order to avoid travelling long distances from different parts of the state to access the only existing centre in Yaba. 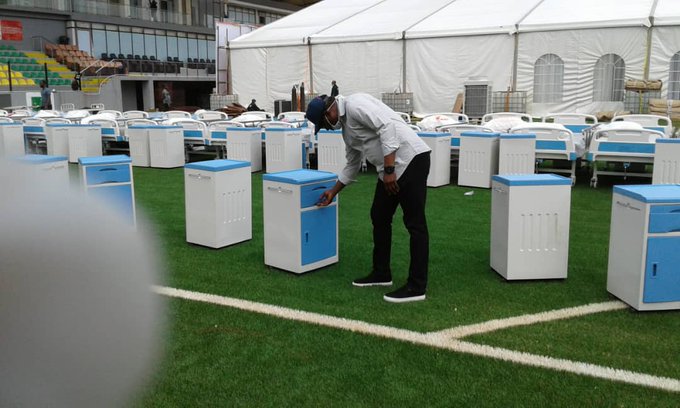 Reports indicate that the government plans to have the isolation centres located across the five divisions of Lagos- Ikeja, Badagry, Lagos Island, Ikorodu and Epe.

The government believes this will also ensure a seamless and coordinated approach towards the quick identification and isolation of suspected cases without overwhelming the infectious diseases hospital at Yaba.

This development is coming at a time when Governor Sanwo-Olu says a  total lockdown is imminent if the cases of coronavirus continue to increase.

He said this on Friday while giving an update on the situation of the pandemic in the state at the State House, Marina.

Of the 70 cases confirmed nationwide, Lagos accounts for 44. The governor, however, said that going by the development, the state was gradually moving towards the number.

Sanwo-Olu said, “We are moving in the direction of a total lockdown but there are numbers or indices that we need to see before we carry it out, which we have yet to see. We need to see a huge spike in the numbers of confirmed cases, so, we are looking at that.”

According to available data, out of the 44 confirmed cases in the state, the governor said that Ikeja and Eti-Osa local government areas had the highest number of patients, adding that the government was focusing on those areas.

This is what I’m talking about. No time for audio donations – businesses should step up. This is being done by a partnership between @gtbank and @africa_finance pic.twitter.com/LqpGxm6vsm

Many Injured, Houses Destroyed As Police Reveals Cause Of Akure Blast (See video)

Foursquare Gospel Church Announce the Death of Its Former G.O

INEC Votes Technology in a Season of Untruth, By Okoh Aihe

BBNaija Shine Ya Eye: I Don’t Mind Sharing My Girl With Another Man – Michael