The Nigerian Police Force has waded into action following the disturbing video of a police team that vandalized the goods of traders located in Lagos.

In the video that went viral today, the team, numbering over ten AK-47 rifles, pulled down and destroyed crates of drink in the shop, believed to be a beer parlour.

The suspected shop owners, according to video evidence, were told to lie face down as their properties were destroyed.

The vandalism is believed to be meted out by the policemen as part of their effort to carry out the Governor Babajide Sanwo-Olu-led government’s directive that all shops and markets should be shutdown excluding those selling essentials. 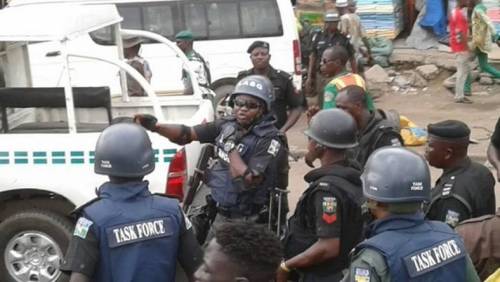 This is part of the government’s move to prevent further spread of the virus, which currently sees the state leading the figure, according to NCDC reports.

Describing the policemen’s action as unprofessional, the Force, through its official Twitter handle, wrote: “The Inspector-General of Police, IGP M.A Adamu, NPM, mni has condemned the apparent unprofessionalism and highhandedness exhibited by the Police officers as shown in this trending video.

“He has therefore directed the Commissioner of Police, Lagos State Command, CP Odumosu H. Olusegun to immediately investigate and commence disciplinary actions against the officers involved.

“The IGP notes that we are now in extra-ordinary times – a global state of emergency.

“Police officers involved in the enforcement of restriction orders and other law enforcement functions must, therefore, exercise their discretionary powers with utmost sense of professionalism, compassion and respect for the citizens.

Following the development, a cross-section of Nigerians, while commending the intervention of the IGP, frowned at the action of the men of the force. They called for strict measures to be taken in order to forestall future occurrences.

Earlier, the Lagos State Government announced the closure of 17 markets across the state while the State’s Assembly passed a bill to curb the spread of the virus.

The Inspector General of Police, IGP M.A Adamu, NPM, mni has condemned the apparent unprofessionalism and highhandedness exhibited by the Police officers as shown in this trending video. https://t.co/jxThV19RlR