The leadership of the National Assembly, on Wednesday, met with the Governor of the Central Bank of Nigeria, Godwin Emefiele, and the Finance Minister, Zainab Ahmed, over the planned review of the 2020 budget.

The meeting which lasted for over four hours in Abuja was also aimed at tackling the economic impact of the coronavirus on the nation’s economy and the recent oil price crash. 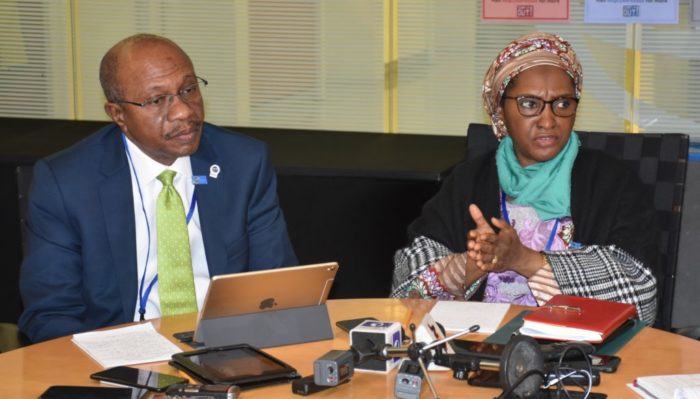 This comes about a week after the Senate resolved that the review of the 2020 budget was inevitable.

The resolution, it was gathered, was sequel to the receipt and deliberation of the interim report of the Senate joint committee on finance, appropriations, national planning and petroleum resources.

In her presentation, the minister of finance said that the Nigerian economy was already fragile and vulnerable prior to COVID-19 and oil price decline.

According to Mrs Ahmed, the impact of the pandemic, which resulted in the international crisis, created a disruption in travel and trade and put “increasing pressure on the naira and foreign reserves as the crude oil sales receipts decline and the country’s micro-economic outlook worsens.”

She also revealed that the budgeted revenues for the Nigeria Customs Service had been reduced from N1.5 trillion to N943 billion “due to anticipated reduction in trade volumes; and privatisation proceeds to be cut by 50 per cent, based on the adverse economic outlook on sales of the Independent Power Projects (IPPs) and other assets.”

Ms Ahmed disclosed that the federal government has undertaken cuts to revenue-related expenditures for the Nigerian National Petroleum Corporation (NNPC) for several projects included in the 2020 Appropriation Act passed by the National Assembly in December 2019.

She added that the federal government had made provision for health sector interventions by introducing import duty waivers for essential input for pharmaceutical firms; tax waivers on new equipment; and deferment of tax to increase production.

She also informed the lawmakers that Nigeria had received a grant of $18.2 million from Japan for strengthening seven NCDC centres across the country and N1 billion would be released by the government to pharmaceutical firms in the country.

On his part, Emefiele said: “While we would expect to see a decline in our expected growth projection for 2020 relative to 2019, the exact impact will be dependent on how well the coronavirus is contained over the next few months, and how long low oil prices persist.”

Others were the Group Managing Director of the Nigerian National Petroleum Corporation (NNPC), Mele Kyari, and Senior Special Assistant to the President on National Assembly Matters, Babajide Omoworare.