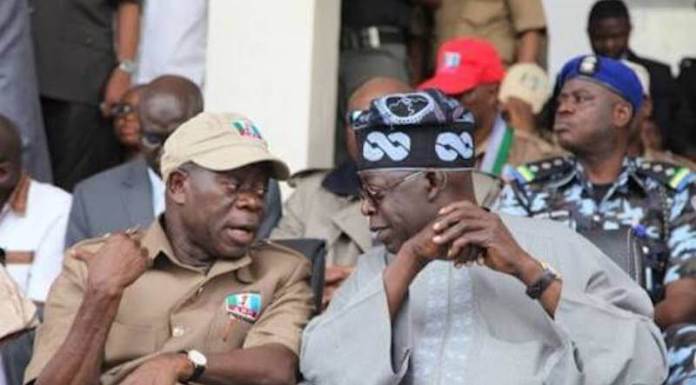 The Appeal Court sitting in Abuja has called off the hearing in the appeal by the National Chairman of the All Progressives Congress, APC, Adams Oshiomhole on his suspension by the Federal High Court.

Last week, the Appeal Court had sent notices of hearing to parties involved in the appeal but when parties got to court on Monday, the Justice Stephen Adah-led three-man panel of Justices sat to hear other cases.

Rising later, the court promised that another panel will be reconstituted to hear the APC National Chairman’s appeal.

Parties were later informed, following a court official’s announcement that the court has elected to hear Oshiomole’s appeal on a later date to be communicated to parties later rather than having a new panel.

The former Edo State Governor, who arrived early at the court, is currently meeting with his team of lawyers on what next steps to take.

Oshiomhole’s appeal is coming barely 24 hours after the national leader of the All Progressives Congress, APC, and former Lagos State Governor, Bola Tinubu, expressed frustrations with developments in his party, declaring that the effects of the desperation of those he described as overambitious politicians exceeded the fatality of the raging coronavirus.

In a widely circulated statement issued ahead of the planned emergency meeting of the party’s National Executive Committee, NEC, Tinubu expressed dismay at the way the provisions of the APC constitution were allegedly being breached by some chieftains of the party due to their personal ambitions.

Tinubu lamented that the political misunderstanding between the suspended national chairman, Adams Oshiomhole, and Governor Godwin Obaseki of Edo State had become a rallying point for those desperate for 2023 to distract President Muhammadu Buhari from governance.

In the meantime, the Director-General of the Voice of Nigeria, Mr Osita Okechukwu, has faulted claims by a national leader of the All Progressives Congress, APC, Chief Bola Tinubu that 2023 ambition of some party members were behind the crisis rocking the party.

But Okechukwu, one of those rooting for Oshiomhole’s ouster, insists that the party chairman brought woes upon himself.

He told Tinubu: “as passionate and loyal members of the APC at the grassroots level, they hitherto held Oshiomhole in high esteem and had high expectations of optimum performance and quality leadership from him.”

The VON DG said that was why APC delegates nationwide unanimously and consensually elected him as sole chairmanship candidate two years ago.

He declared: “It is, therefore, with deep regret that two years down the line, Comrade Adams Oshiomhole, now a Bull in a China Shop, in utter disregard to the high expectations of the responsibility entrusted on him, and the constitution of the APC has today committed without remorse or introspection 10 monumental cardinal sins against our great party, APC.”

“He Is Only Trying To Stay Relevant” – Nkechi Blessing Slams Her Ex, Opeyemi Falegan After He Tendered Apology

Joy Adewuyi Emerges As The New President Of ICAN