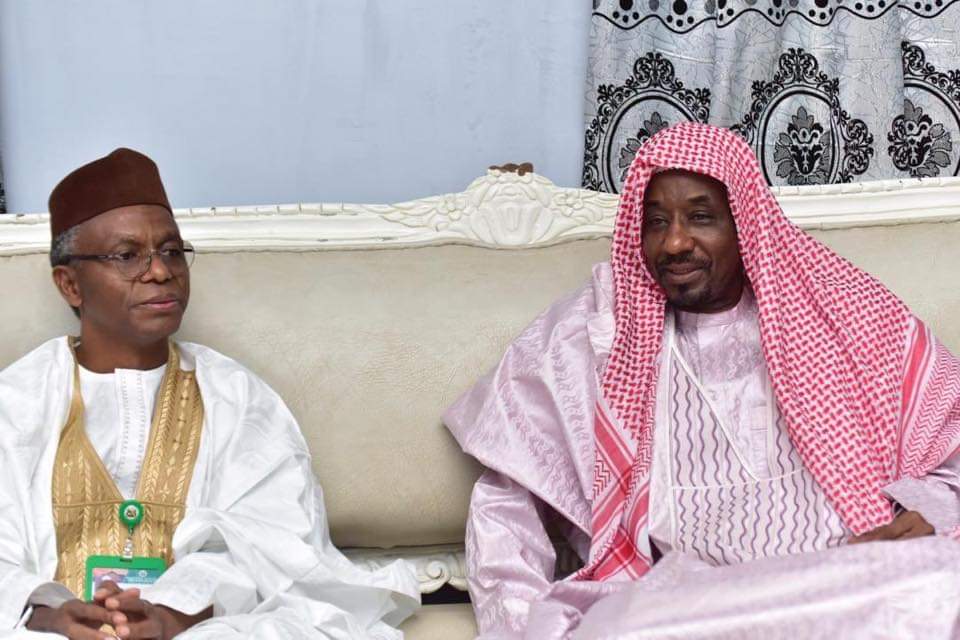 Kaduna State Governor, Nasiru El-Rufai, has met with dethroned Emir of Kano, Muhammad Sanusi at Awe in Nasarawa State, where he was banished to after his dethronement.

According to reports, Governor El-Rufai, on Friday, arrived Awe Local Government where Sanusi is currently residing and journalists were only allowed to stay 200 metres away from the place due to heavy security presence.

Prior to Governor El-Rufai’s visit, a Federal High Court sitting in Abuja granted an interim order releasing Sanusi from detention.

The presiding Judge, Justice Anwuli Chikere, granted the order in line with the prayers on the exparte motion filed on behalf of the deposed Emir by his legal representatives led by Mr Lateef Fagbemi (SAN).

Justice Anwuli noted that the order for the release of the deposed monarch should be served on the respondents to the application.

March 26, 2020, has been fixed for the hearing of the main suit challenging his detention.

El-Rufai’s visit, in the meantime, is coming barely 24 hours after Nasarawa state Governor, Abdullahi Sule, visited the 58-year-old former Governor of the Central Bank of Nigeria.

Reports suggested that the Governor and his entourage were received by the Emir of Awe as journalists were also refrained from taking photographs or videos of the visit and the government also declined comments on the visit to the former Emir who ascended the throne after the demise of hid granduncle, Ado Bayero.

Meanwhile, there are reports of heavy security presence around the present abode of the deposed Emir. It was gathered that about thirty personnel of the Police Mobile Force, PMF, and the Department of State Security, DSS, are providing security for the deposed Emir of Kano, in the town.

Sanusi has been in the news since his dethronement and banishment to Nasarawa on Monday. He has since gotten appointments from the Kaduna State Government; the recent being his appointment as the Chancellor of Kaduna State University.

Katsina School Abduction: Buhari Under Another Round Of Fire