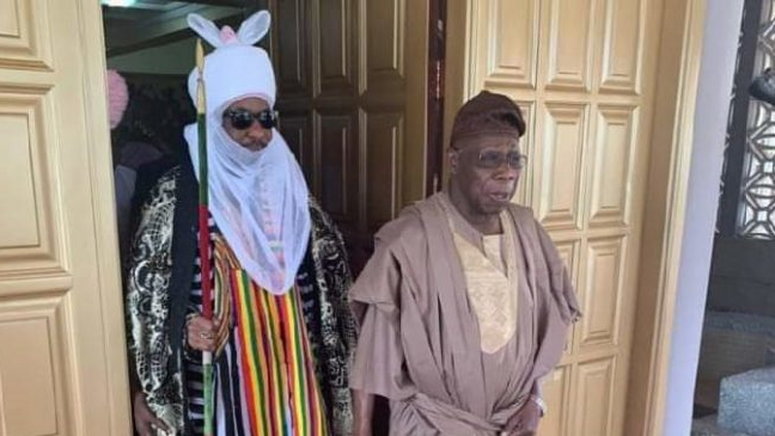 Following his dethronement and banishment by the Governor of Kano State, Abdullahi Ganduje, on Monday, former Nigerian President, Olusegun Obasanjo, has written to the embattled Emir of Kano, Muhammadu Sanusi II.  READ ALSO: Aminu Ado Bayero Is The New Emir Of Kano

The letter, which was first shared online by Sen. Dino Melaye and presently making the rounds on the internet, Obasanjo, who ruled Nigeria between 1999 and 2007, described Sanusi’s dethronement saying that it has the sad and good side.

The former Head of State, although noted that Sanusi’s removal was undeserved, he said the former Central Bank of Nigeria Governor had paid the price.

In the letter signed by the Ogun State-born political bigwig, he stated: “I woke up this morning and after my morning exercise, devotion and my morning meeting with my staff, I heard the sad and good news of your removal by the Executive Council of the Kano State Government.

“It is sad because it was undeserved. It is good because you have paid the price. My prayer is that God should give you the fortitude and the courage to continue on the path that you have chosen for yourself in the best interest of our country and humanity.

“Please accept, Your Highness, the assurances of my highest consideration”
Few hours after Sanusi’s dethronement, Governor Ganduje approved the appointment of Alhaji Aminu Ado Bayero as the 15th Emir of Kano.

Making the appointment of the public, the Secretary to the state government, Alhaji Usman Alhaji, said: “I have been directed by his Excellency, the Governor of the state, Dr Abdullahi Umar Ganduje following the resolution of the state Executive Council and recommendation by Kano Kingmakers to announce the appointment of Alhaji Aminu Ado Bayero as the new Emir of Kano.”

The state government, in an earlier statement, revealed that the dethronement of Sanusi was as a result of his disrespect to lawful instructions from the office of the state governor and other lawful authorities. He was alleged to have breached the Constitution of Kano State, and his activities were described as gross insubordination.

Usman Bayero is the son of the late Emir of Kano, Alhaji Dr Ado Abdullahi Bayero; the predecessor and grand uncle of Sanusi. He was also the Emir of Bichi a Local Government Area; an emirate council in Kano State.

“Made In 1995” – Tacha Celebrates 25th Birthday With Stunning Photo