Why Sanusi Was Dethroned

The last has not been heard about the ongoing controversy surrounding the scuffle between the Kano State Government and the Emirate as the Emir of Kano, Malam Muhammadu Sanusi ll has been dethroned over disrespect to the office of the governor and other government agencies. READ ALSO: Bishop Oyedepo Attacks President Buhari

Making the development public, the Secretary to the State Government, Alhaji Usman Alhaji, said the removal was with immediate effect.

Further clearing the air on the reason for the Sanusi’s removal, Alhaji stated that the Emir’s action violated the part 3 section A-E of Kano State law and that his removal was in line with consultations with relevant stakeholders.

While adding that a new emir would be announced in due course, he urged Kano people to remain calm and go about their normal businesses.

Earlier, there was a massive drama on the floor of the Kano State House of Assembly on Monday as the Deputy Speaker and chairman of the Public Complaints and Petition Committee, Hamisu Ibrahim Chidari, raised an observation over the ongoing investigation of petitions regarding alleged violation of the culture, tradition and religious values of the people of Kano by Emir Muhammad Sanusi 11.

Trouble, it was gathered, started when Chidar, in his attempt to make his observation known to members, was instantly opposed by lawmakers identified as members of Peoples Democratic Party, PDP.

A heated debate reportedly ensued, resulting in physical combat, as the opposition members struggled to take control of the mace.

In the process, the mace was instantly rescued by security agents and the Sergeant of Arm attached to the Assembly.

According to reports, the free-for-all lasted about 25 minutes before sanity returned to the House and a 30 minutes break was observed in order to ensure absolute calm on the floor of the House.

Following the development, security has reportedly been beefed up at the Assembly to forestall any eventuality.

The removal of the Emir has, however, sparked reactions among Nigerians who claimed that the Governor of the state, Abdullahi Ganduje, was showed no respect to the traditional authority wielded by Sanusi. They, however, showered encomium on the former Governor of the Central Bank of Nigeria for remaining calm in the face of adversity.

See the copy of the press statement below: 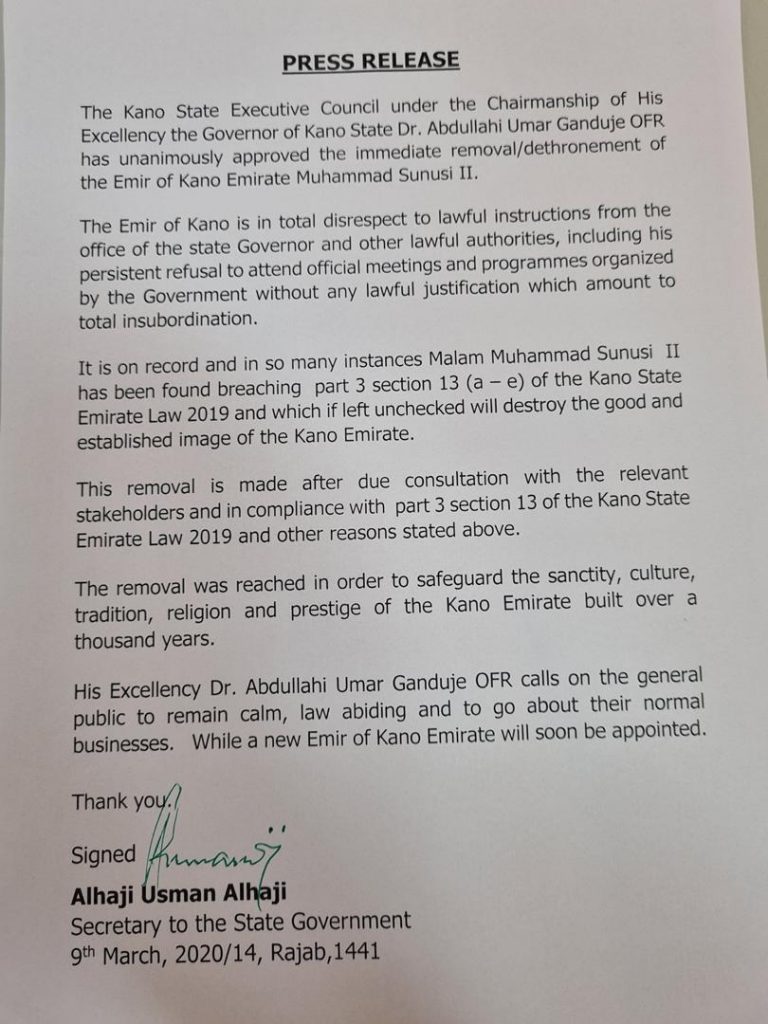